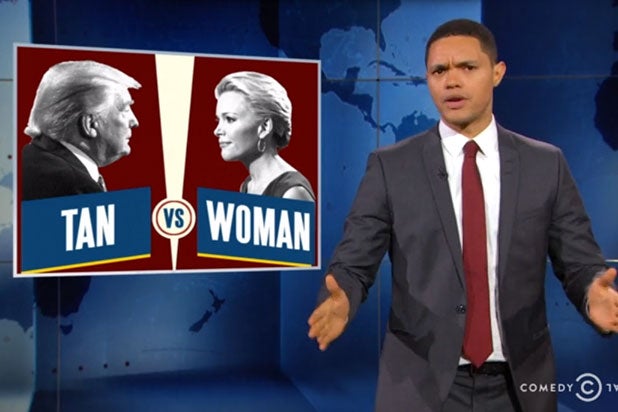 Trevor Noah ripped into Megyn Kelly’s interview with Donald Trump, saying that the Fox special wasn’t about politics but more so about “two brands.”

“The hype for this event was out of control, it was like Apple revealed a new phone in the middle of a new Beyonce song in the middle of the new ‘Star Wars’ sequel,” he said on Wednesday’s episode of “The Daily Show.”

“Megyn Kelly Presents” averaged 4.8 million viewers on Tuesday night, and was the first sit-down between Kelly and Trump following their nine-month tumultuous relationship spanning GOP debates, antagonistic tweets and comments made in personal interviews. However, critics described the Fox News anchor’s broadcast debut on Fox as “awkward,” “pointless,” “boring” and “unimpressive.” A few even took issue with Kelly for plugging her upcoming autobiography, instead of pressing her biggest guest, presumptive GOP nominee Trump, on important issues.

Saying it was “advertised as a blood bath,” Noah was also highly critical of Kelly’s silly questions and follow-up fumbles. For example, the man running for control of the world’s most powerfully military “doesn’t think it’s healthy to follow up on mistakes, and there’s no follow-up question!”

Noah compared it to Robert Durst’s confession and how things might have been had “The Jinx” filmmakers skipped over his “I killed them all” admission.

“It didn’t seem to be about journalism or the Republican party or even the election, it seemed to be about two brands: Donald Trump and Megyn Kelly,” Noah said critically. “Or maybe it was just couples therapy.”

He added, “Megyn Kelly, I don’t get it; you spent months lambasting Trump with his sexist comments and now you’re laughing it off? I don’t believe this, but Megyn Kelly just got negged by Donald Trump!’

On Thursday, Kelly responded to Noah’s digs, tweeting, “So grateful I have men like @Trevornoah 2 advise on how to deal w/gender attacks- I’m sure his life experience far better than mine on this!”

So grateful I have men like @Trevornoah 2 advise on how to deal w/gender attacks- I'm sure his life experience far better than mine on this!