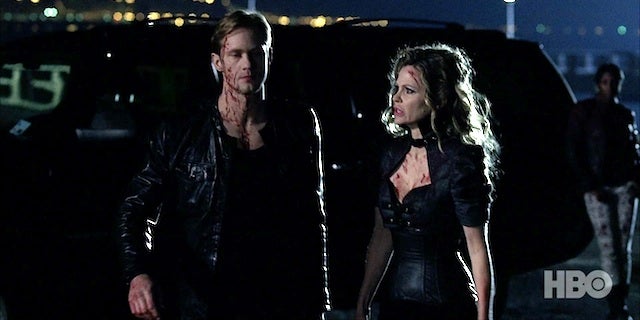 The big question on "True Blood's" sixth season: Whom can you trust?

The Authority is no more. Bill (Stephen Moyer) has been born again with mysterious ancient vampire powers. Humans have risen up against supernaturals. And there's a vampire with a real taste for faerie blood who's after Sookie (Anna Paquin).

Just another season in Bon Temps.

Take a look at the official descriptions for the first three episodes of Season 6 below.

Episode #62: “The Sun”
Debut: SUNDAY, JUNE 23 (9:00-10:00 p.m.)
A long-lost relative reveals himself to Jason and Sookie. After Tara is victimized by a new government weapon, Eric takes matters into his own hands in an effort to thwart Burrell’s anti-vampire initiatives. On the road to work, Sookie is drawn to a handsome stranger who shares her faerie abilities. Sam is unnerved by supernatural-rights zealot Nicole (Jurnee Smollett-Bell), and is confronted by Alcide and Martha (Dale Dickey) about Emma’s future. Bill contemplates the scope of his heightened powers.
Written by Angela Robinson; directed by Dan Attias.

Episode #63: “You’re No Good”
Debut: SUNDAY, JUNE 30 (9:00-10:00 p.m.)
Irate over Burrell’s blatant aggression towards vampires, Eric takes matters into his own hands. After dangerously testing the limits of his powers, Bill enlists a TruBlood innovator to synthesize a new type of blood – but has difficulty finding the right donor. Sookie begins to learn why Warlow is after her. Sam receives unexpected help from Nicole and her Vampire Unity Society (V.U.S.) associates. Steve Newlin (Michael McMillian) finds his past ideals turning into a current nightmare.
Written by Mark Hudis; directed by Howard Deutch.

Watch the new preview videos below.