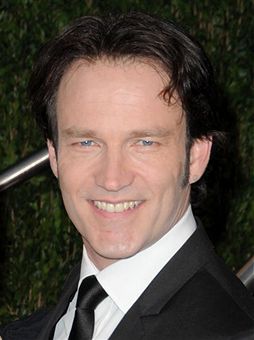 "True Blood" star Stephen Moyer will star in both "The Double" and "The Big Valley," according to the Hollywood Reporter.

"The Double" stars Richard Gere and Topher Grace as a retired CIA operative and a young FBI agent, respectively. Moyer will play a Russian spy who figures in the duo’s investigation of a senator’s murder in Washington.

Imagenation Abu Dhabi is co-financing and co-producing the film, which begins shooting on June 21 in Detroit.

After that, Moyer will head to Louisiana for the big-screen adaptation of the 1960s ABC series "The Big Valley." Jessica Lange stars as the matriarch of a wealthy family of ranchers in 19th century California.

Moyer will play Jarrod Barkley, the family’s eldest son and a respected attorney who represents ranchers fighting to keep their land from being taken by railroad companies.

Moyer will next appear on the big screen in "Priest," the post-apocalyptic vampire movie that Screen Gems will release on March 4.

The third season of "True Blood" premieres on HBO on Sunday, June 13.

Moyer is represented by ICM and Luber Roklin Entertainment.