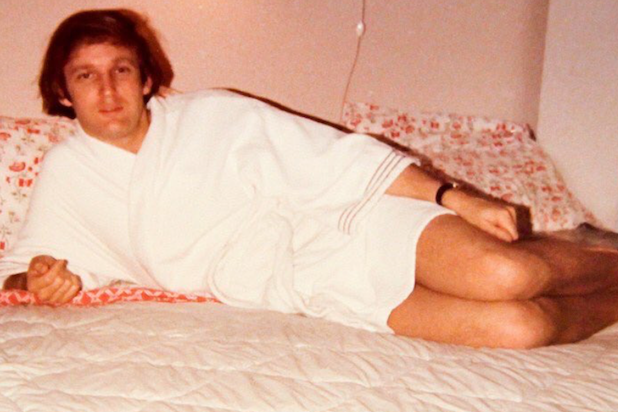 The Internet is abuzz with memes and comments about President Donald Trump’s bathrobe selection after a bizarre series of events in which the White House eventually denied that he wears a robe to watch TV.

The New York Times published an article on Sunday that mentions Trump “watching television in his bathrobe,” which resulted in Press Secretary Sean Spicer deriding the article for multiple alleged falsehoods, adding, “I don’t think the president owns a bathrobe.”

Trump didn’t care for the story himself and took to Twitter to express his displeasure, saying the paper is “making up” stories and sources, with the bathrobe being a detail Trump doesn’t think came from a legitimate source.

“That story was so riddled with inaccuracies and lies that they owe the President an apology for the way that thing was written,” Spicer said. “I don’t think the president wears a bathrobe, and definitely doesn’t own one.”

Politico watchdogs were quick to offer old photos of Trump wearing a bathrobe that were part of a Daily Mail exclusive. But, in fairness, they appear to be at least a few decades old. We hope that if Trump does own a robe, it’s not the same one in the now-viral photos.

Ummm, I'm not a football effort, but I think this might be Tom Brady's Super Bowl jersey hanging next to me in the closet. ????

Finished dinner. Time to put on my bathrobe, yell at the TV, and demand to be addressed as "Mr. President"

Sean Spicer: "I don't think the president owns a bathrobe."

Thanks @PressSec @seanspicer I just threw up thinking of @POTUS & his #tinyhands wo a robe watching tv @CNNPolitics https://t.co/0TPA7gWsob

Spicer says that @POTUS does not own a bathrobe…here are two pieces of evidence. cc: @BraddJaffy @maggieNYT @GlennThrush pic.twitter.com/OBi24QcVx2

I don't like that I've thought about Trump in a bathrobe in the last 24 hours.

Wait: A woman playing Trump doddering around the White House in a bathrobe, unable to work the light switches, tweeting about SNL

Need a recommendation on how to get out a Big Mac's special sauce stain.

No one who owns HOTELS doesn't have have a damn bathrobe. That is some bullshit.

Stop tweeting Trump in a bathrobe you sick bastards.

Just when I thought the mental image of Trvmp in a bathrobe was bad enough, a helpful media outlet tweets an actual photo ????

Hey @realDonaldTrump I just subscribed to @nytimes because I value their reporting. By the way, I'm writing this tweet in my bathrobe…

Trump is freaked out that the NYTimes says he wanders the White House in a bathrobe at 6:30 p.m.

Sean Spicer: "I don't think the president owns a bathrobe." (via @justinsink

Spicer tweeted his opinion of the situation on Tuesday:

"OMG, he's trying to get us to talk about terrorism. What do we do?"

"Jump on the bathrobe story"

Get ready for two more years of this

We’re in for at least (probably) two more years of Donald Trump as President of the United States. That means lots of bad things and one particularly great thing: We’re in for a lot more Alec Baldwin impersonations of Trump on “Saturday Night Live.” From the often ridiculous phrases to the weird outbursts, “SNL” has captured all of it. In fact, the sketches often seem to struggle to surpass reality in terms of absurdity. But they get there. Here’s a list of every Baldwin-as-Trump “SNL” sketch, ranked from least to most hilarious, with links to the sketches.