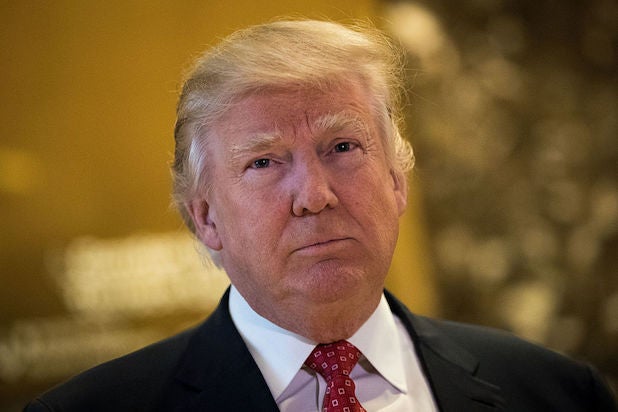 President Trump said Chinese president Xi Jinping was eating “the most beautiful piece of chocolate cake that you’ve ever seen” when he was informed the United States launched an airstrike against Syria — and Twitter quickly reacted, mocking POTUS.

Trump made the comments during an interview with Fox Business Network host Maria Bartiromo that aired on Wednesday morning. Xi was visiting Trump at his Mar-a-Lago estate when the military strikes were launched, and Bartiromo asked how he told the Chinese leader of the attack.

“I was sitting at the table. We had finished dinner; we are now having dessert. We had the most beautiful piece of chocolate cake that you’ve ever seen and President Xi was enjoying it. And I was given the message from the generals that, ‘The ships are locked and loaded. What do you do?’ And we made the determination to do it, so the missiles are on the way. And I said, ‘Mr. President, let me explain something to you.’ This is during dessert. ‘We’ve just fired 59 missiles,'” Trump explained.

Trump also briefly confused Syria with Iraq, saying that he told President Xi that missiles were “heading to Iraq,” before Bartiromo politely corrected him. (In fairness, Trump had just mentioned the Iraq war moments before.)

.@POTUS tells @MariaBartiromo he told President Xi about the Missile strikes over "the most beautiful piece of chocolate cake." pic.twitter.com/vPLu7ZhxbR

Also Read: Trump Slams Hillary Clinton: 'She Was Guilty on Every Charge'

Twitter quickly responded, with one user writing, “There seems to be a disconnect in the brain of a man who refers to both chocolate cake and the launching of missiles as beautiful,” while another user wrote, “Be careful ordering the Death by Chocolate cake at Mar a Lago is all I’m saying.”

Check out some of the best reactions:

Maria Bartiromo’s face as Trump told her about the bombing and the chocolate cake. No joke. pic.twitter.com/7fG3weN3Tl

There seems to be a disconnect in the brain of a man who refers to both chocolate cake and the launching of missiles as beautiful.

Be careful ordering the Death by Chocolate cake at Mar a Lago is all I’m saying.

I like coffee with chocolate cake, but Tomahawk missiles prob also pair well.

What's your favorite missile after a meal? Let us know in th

@BraddJaffy One of those countries with lots of sand. Did I mention the chocolate cake?

We all know you bombed some country that you don't care about. But please, tell me more about the chocolate cake. https://t.co/by3BmENvw7

@TrumpHaterShirt Yeah like he really needs that chocolate cake. ???? pic.twitter.com/IY9NhPEoRR