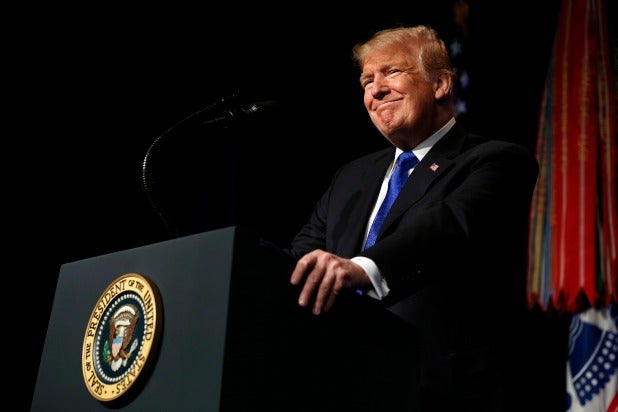 President Donald Trump called out the Washington Post and one of its political reporters, Dave Weigel, berating them both for an incident in December 2017 in which Weigel tweeted a misleading image of the crowd at a Trump rally.

“He got there four hours early. He then sent out a note — something to the effect of not very good crowd size — I never saw it. I don’t follow the guy,” Trump told a cheering crowd at the 2019 Conservative Political Action Conference (CPAC) in Maryland.

“He got there four or five hours early,” Trump continued, “He took pictures and you know who really got even? Our people, because they were incensed. I don’t think we’ve had an empty seat since we announced [my candidacy].”

Weigel did not immediately respond to request for comment from TheWrap, while the Washington Post declined to make a statement.

The original incident took place after Weigel tweeted a sparsely populated image of a Trump rally in Pensacola, Florida, which Trump had described in his remarks as “packed to the rafters.” Weigel put the quote alongside images of the half empty stadium to suggest Trump had been misleading people.

“.@DaveWeigel @WashingtonPost put out a phony photo of an empty arena hours before I arrived @ the venue, w/ thousands of people outside, on their way in,” Trump tweeted at the time. “Real photos now shown as I spoke. Packed house, many people unable to get in. Demand apology & retraction from FAKE NEWS WaPo!”

Weigel walked the tweet back at the time, saying it was only live briefly and hadn’t been a fully reported article for the paper.

During his CPAC remarks, the president also defended his crowd sizes more broadly, including his much-discussed 2016 inaugurations crowds — suggesting that they too had been deliberately deflated by the media.

“They did the same thing at our big inauguration speech. You take a look at those crowds,” Trump said immediately after the Weigel riff, adding the photos that went viral of the moment were taken hours before the main event.