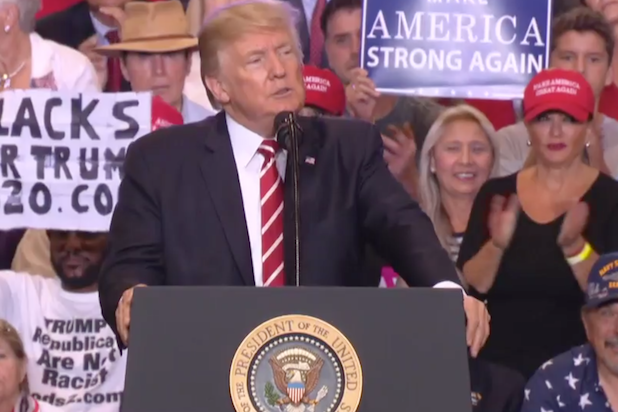 Hollywood and tech leaders have begun mobilizing following reports that President Donald Trump is expected to announce on Tuesday that he will end the Deferred Action for Childhood Arrivals program, or DACA, with a six-month delay.

Actor George Takei called the move “cruel, divisive and politically motivated,” while director Rob Reiner concluded: “Unfortunately there is no other way to say this: Donald J. Trump is a heartless prick.”

Major tech leaders, including Apple CEO Tim Cook and Facebook founder Mark Zuckerberg also decried the move and urged Congress to pass legislation for protection of hundreds of thousands of immigrants who arrived in the U.S. as children with parents who entered the country illegally or stayed without proper documentation.

Implemented by the Obama Administration in 2012, DACA allows those young immigrants to receive a renewable two-year period of deferred action from deportation and become eligible to receive a work permit.

If Trump follows through with his plans, current DACA recipients will be at risk of deportation.

Hollywood stars, politicians and business leaders reacted to the report with strong disapproval, condemning Trump for planning to lift the program and urging the Republican-controlled Congress to come up with a replacement.

250 of my Apple coworkers are #Dreamers. I stand with them. They deserve our respect as equals and a solution rooted in American values.

#Trump expected to end #DACA! I guess he thinks Nothing brings America together like tearing families apart! #TeamDl

I stand with #Dreamers who make our country stronger. Check out the thread below to see how you can defend DACA now. https://t.co/AedjihqnPG

Seems like standing up for children against Trump & his Alt-Right compadres about Ending DACA should be a home run for the Pro-Life crew.

he has none – zero https://t.co/DAXngr9PtH

Nearly 1 million young immigrant #DREAMers will be at risk of deportation if @realDonaldTrump ends #DACA. We demand #DefendDACA! #HereToStay

Ending DACA would be Trump’s most evil act https://t.co/PkwyDFQOi3

If you tweeted about #DACA this is required reading. https://t.co/JVdre45kVa

Meanwhile, @realDonaldTrump, who has never shown an ounce of compassion or made a single sacrifice for anyone, decides to end DACA. https://t.co/SUxH4ZTZgA

Ending DACA would be nothing short of heartless. It's on us to demand a vote on the DREAM Act. We must stand with our Dreamers. https://t.co/pi30H6mA1J

There is no economic, national security or social cohesion rationale for ending DACA. This is purely Trump's nod to racial resentment.

.@POTUS reported decision to end #DACA is a disgrace, & I promise that I will fight to protect #Dreamers in Minnesota and across our nation.

Trump’s plan to deport Dreamers in 6 mos. is cruel, divisive and politically motivated. Shame on him, and shame on us for electing him.

Unfortunately there is no other way to say this: Donald J. Trump is a heartless prick.

Our country should protect children. Period. This should not be even a discussion.