President Trump — or someone with access to his Twitter account — would prefer people forget he doesn’t have the Midas touch when it comes to political endorsements.

Strange, appointed to temporarily fill the seat left vacant after Jeff Sessions was appointed U.S. Attorney General, was endorsed by Trump after he came in second in a GOP primary in August, sparking tonight’s runoff.

Also Read: Trump Calls for NFL to Fire Protesting Players: 'Get That Son of a B--h Off the Field' (Video)

Trump even made a personal appearance at a rally on Friday, where he delivered the now-infamous speech calling on NFL owners to fire players who protest police brutality by kneeling during the national anthem. Or, as he put it, “get that son of a bitch off the field.”

In the 24 hours before Tuesday’s vote, he urged voters to turn out for Strange. However, Trump’s praise for Strange failed to convince Alabama Republicans, who preferred Moore 55 percent to 45 percent.

And so it was that soon after Strange’s loss, the pro-Strange tweets disappeared.

Luckily, the internet is forever. See them below, courtesy of Pro Publica. 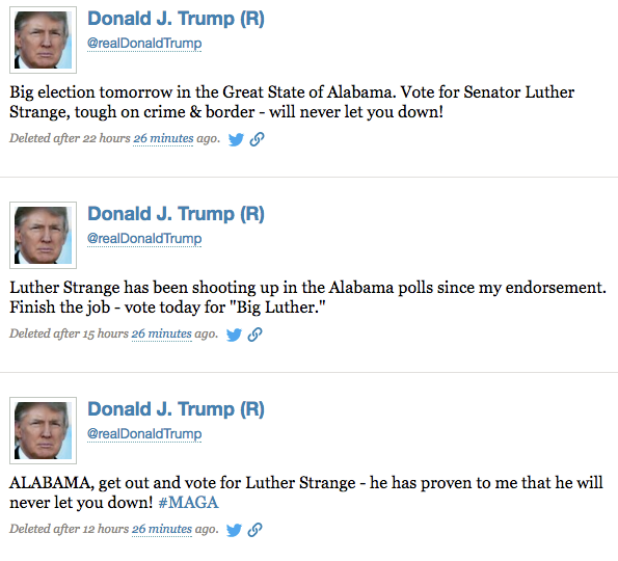 While private citizens can delete tweets freely, it’s unclear whether the president can. The Presidential Records Act of 1978 requires preservation of all presidential records, permitting destruction only after consultation with the Archivist of the United States. The Obama administration classified private social media posts as communication under the PRA, but Trump has so far not done so.

Trump has used his personal account, @realDonaldTrump, to announce policy, most infamously his proposed ban on transgender soldiers in the U.S. military. He has also deleted tweets from that account, even tweets that refer to official government business. He is currently being sued by two watchdog groups for violating PRA, in part over these deletions.

In the meantime, Trump may be moving on from his support for Strange (he’s already come out for Moore in the special election scheduled for December).