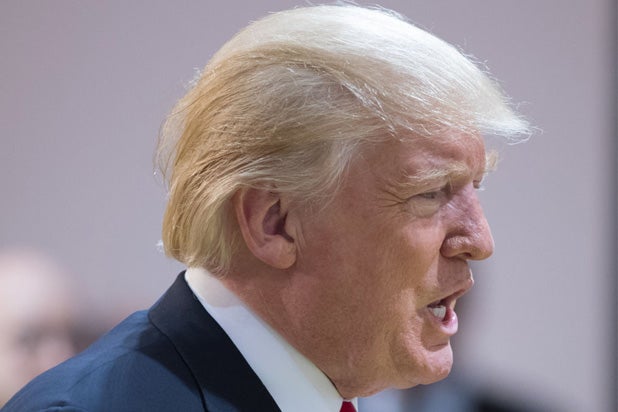 President Donald Trump is clarifying reports last night that he reached a deal with Congressional Democrats about the Deferred Action for Childhood Arrivals (DACA) program and a border security program that does not include a wall between the United States and Mexico.

In a series of tweets Thursday morning, Trump shared what was discussed at a dinner meeting with Rep. Nancy Pelosi and Sen. Chuck Schumer, who Wednesday night released a joint statement saying, “We agreed to enshrine the protections of DACA into law quickly, and to work out a package of border security, excluding the wall, that’s acceptable to both sides.”

“No deal was made last night on DACA. Massive border security would have to be agreed to in exchange for consent. Would be subject to vote,” Trump said Thursday on Twitter. He said the wall “will continue to be built,” but also defended the DREAMers, who are DACA recipients.

“Does anybody really want to throw out good, educated and accomplished young people who have jobs, some serving in the military?” the president asked. “They have been in our country for many years through no fault of their own – brought in by parents at young age. Plus BIG border security.”

A deal does seem imminent, as Pelosi and Schumer released a second statement saying there is a “mutual goal of finalizing all details as soon as possible.” What remains to be negotiated are the “the details of border security.”

“The wall will come later,” Trump told reporters Thursday morning, reported CNN. He repeated that the wall is currently under construction. “We’re doing a lot of renovations we’re building four different samples of the wall to see which one we’re going to choose. The wall is going to be built — it will be funded a little bit later.”

If the deal goes through, this will be the second time in recent weeks that Trump has reached across the aisle to work with Pelosi and Schumer. Earlier this month, the president worked with the democratic leaders to raise the debt ceiling and extend government funding, particularly for a Hurricane Harvey relief package. The move left many in the GOP confused about his sudden bipartisanship.

It was reported that Trump was so happy with the positive coverage of the deal that he tweeted something to reassure DREAMers at Pelosi’s request. “For all of those (DACA) that are concerned about your status during the 6 month period, you have nothing to worry about – No action!” he tweeted last week.

The Trump administration announced last week that the DACA program will end, but gave Congress six months to come up with a better program to keep about 800,000 young people from losing their DACA status.

“This is a positive step toward the President’s strong commitment to bipartisan solutions for the issues most important to all Americans,” a White House official said in a a statement Wednesday. “The administration looks forward to continuing these conversations with leadership on both sides of the aisle.”

No deal was made last night on DACA. Massive border security would have to be agreed to in exchange for consent. Would be subject to vote.

The WALL, which is already under construction in the form of new renovation of old and existing fences and walls, will continue to be built.

Does anybody really want to throw out good, educated and accomplished young people who have jobs, some serving in the military? Really!…..

…They have been in our country for many years through no fault of their own – brought in by parents at young age. Plus BIG border security