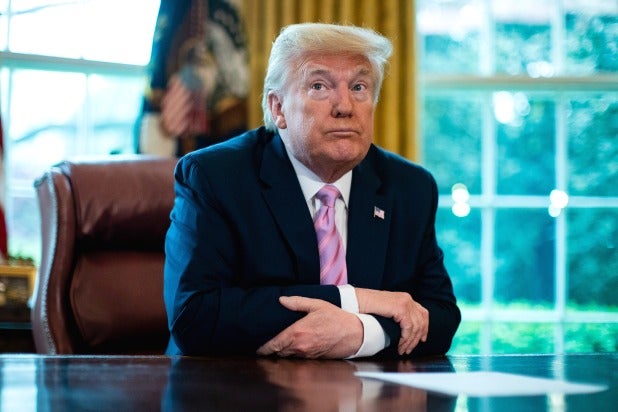 President Donald Trump on Thursday afternoon signed an executive order he said was intended “to defend free speech” against the content moderation policies of several major tech companies. The announcement comes just days after Twitter, for the first time, attached a fact check notification to false statements Trump made on the platform.

Read the text of the order here.

“A small handful of powerful social media monopolies controls a vast portion of all public and private communications in the United States,” Trump said on Thursday, without naming any tech companies in particular. “They’ve had unchecked power to censor, restrict, edit, shape, hide, alter, virtually any form of communication between private citizens and large public audiences.”

The executive order calls on the Commerce Department to petition the Federal Communications Commission to review Section 230 of the Communications Decency Act, a law that gives tech companies the freedom to edit or censor content on their platforms. Section 230, which was enacted in 1996, is also the legal shield that safeguards tech stalwarts, such as Facebook, Twitter, and YouTube against being sued for what its users post.

Curtailing or even stripping these privileges could quickly turn into a legal headache for major tech companies. At the same time, legal experts have said the president doesn’t have the authority to alter the law — which is likely why he’s pushing for the FCC to review Section 230.

Trump, in another video message shared by the White House’s Twitter account, said the law gives social media companies like Twitter “an unprecedented liability shield, based on the theory that they’re a neutral platform — which they are not.”

The president said his executive order “calls for new regulations” under Section 230 to “make it that social media companies that engage in censoring or any political conduct will not be able to keep their liability shield. That’s a big deal. They have a shield. They can do what they want.”

Also Read: Trump Retweets Video of Supporter Saying 'The Only Good Democrat Is a Dead Democrat'

“This debate is an important one. The Federal Communications Commission will carefully review any petition for rulemaking filed by the Department of Commerce,” FCC chairman Ajit Pai said after the order was made public.

On Tuesday, Twitter added a fact-check notification to two of the president’s tweets containing the false claim that mail-in voting leads to fraud. The notification linked to several articles explaining that the claim has no basis in fact. In response, Trump accused the company — on Twitter, no less — of “interfering in the 2020 Presidential Election” and “stifling FREE SPEECH.”

Jeff Kosseff, a law professor at the U.S. Naval Academy and author of “The Twenty-Six Words That Created the Internet,” a book on Section 230, told TheWrap last year the law was adopted to give sites “breathing room” to moderate content.

Those moderation choices in recent years have irritated some users, though, who believe companies like Twitter and Facebook have unfairly targeted conservative voices — charges the company’s have pushed back against.

Since taking office in 2017, the president has ripped these companies on multiple occasions for their moderation policies. On top of that, the White House launched an online tool in 2018 allowing Americans to report “political bias” on social media. The “Tech Bias Story Sharing Tool,”  which is no longer accepting submissions, asked users to share”what happened on social media,” and offered a list of companies to complain about, including Facebook, YouTube, and Twitter.

In other words, the tension between Trump and Silicon Valley was already running high before Twitter added its fact check on Tuesday.

Whether Trump’s executive order will lead to any changes is debatable.

“Among other things, the executive order recommends the commerce department petition the Federal Communications Commission to enter an interpretation of Section 230. If that sounds convoluted, that’s because it is convoluted,” Sylvain told TheWrap.

He continued: “The White House recognizes it cannot promulgate an interpretation of a statute by executive order, so they’ve asked an agency over which the president has control over, the commerce department, to petition the FCC, an independent agency over which he has no control. And the only way we evaluate what the FCC can do is by looking at the statute, which is written by congress, and Section 230 does not set out any authority for the FCC to interpret Section 230.”

The likelihood Section 230 ends up getting changed because of the executive order, Sylvain added, is “low.”