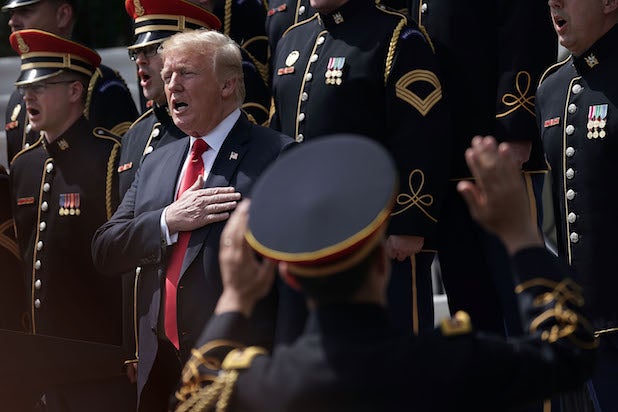 President Trump frequently makes a big deal out of how patriotic he is, but how well does he know one of America’s unofficial anthems, “God Bless America?” Turns out not even a little bit.

When Trump on Monday told the the Philadelphia Eagles they were disinvited from the White House party celebrating the team’s recent Super Bowl Victory, he blamed players who “disagree with their President because he insists that they proudly stand for the National Anthem, hand on heart, in honor of the great men and women of our military and the people of our country.” He announced instead that public celebration of patriotism would be held in its place.

But when the event he called “Celebration of America” came, Trump was caught on video mouthing along to “God Bless America,” clearly not knowing any of the lyrics aside from the title.

Watch below and see for yourself:

Trump unable to remember words to "God Bless America" at replacement event he commissioned to prove his patriotism: https://t.co/LrMPaCEnen pic.twitter.com/oCcWMX9g39

So how did he do America?

“Donald Trump sings ‘God Bless America’ like the rest of us sing ‘Despacito,” one person tweeted after video surfaced.

“Cadet Bone Spur can’t remember the Star Spangled Banner or this little patriotic ditty written by Israel Beilin,” said another, referencing both Trump’s reason for not serving in Vietnam and the birth name of songwriting legend Irving Berlin, who wrote the song.

And multitudes of Twitter users noted that the song only has 28 words in it.

NBC News also reported that a man heckled Trump during his remarks, saying, “Stop hiding behind the armed services and the national anthem.” Video and photos also showed that at least one man took a knee during the National Anthem.

This isn’t the first time the self-styled defender of all things Patriotic has fudged a little on basic Americana. Back in January, Trump didn’t seem to know the words to the National Anthem when it was performed at the 2018 College Football Championship.

See a sample of reactions to Trump’s mangling of “God Bless America” below.

I find it more disrespectful for the United States President to butcher “God Bless America” than for NFL players to kneel in order to protest racial injustice.

trump: they MUST stand during national anthem

There are 28 words in God Bless America https://t.co/guGAfuERY1

There are only 28 words in 'god bless america' https://t.co/KQXRhEu4OO

There are 28 different words in "God Bless America" and the only word that is more than two syllables is "America." We're discussing a grown man's ability to remember the nationalist version of a song for toddlers. What a world.

There are 28 total words in "God Bless America".