President Trump is receiving criticism on Twitter Thursday morning after retweeting a meme labeled, “Best eclipse ever,” which shows him blocking President Obama.

Many users were quick to point out that Trump is the moon blocking out the shining sun in this scenario, but as all-things political, plenty of people also defended Trump. 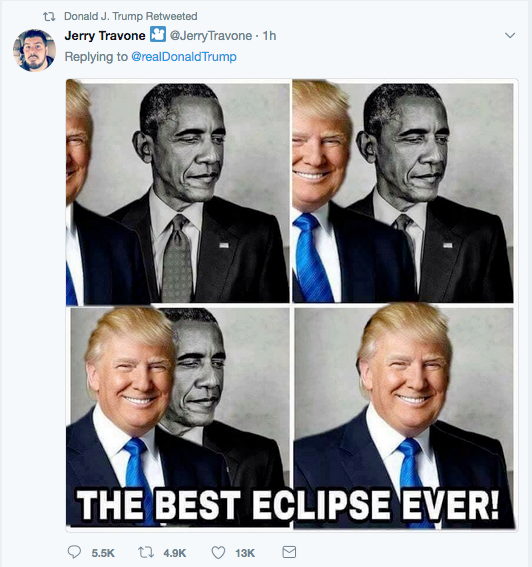 One user wrote, “This is actually correct. The Darkness of Trump has overtaken the brightness of Obama. The Sun is what gives us life and energy!”

“Eclipses have no positive impact on earth, while the Sun is what provides the entire world with life! Keep that in mind,” he wrote. “The moon (Trump) is responsible for the changes in tides and bringing the crazy out in some people… The Sun (Obama) is what allows Earth to sustain itself as well as every plant, animal and human on the planet.”

Meanwhile, a pro-Trump user wrote, “In the last 6 months my stocks have soared. My families future is brighter than the last 8 years. Coincidence?”

Check out some of the reactions:

I can't believe #potus45 retweeted this! Total disrespect for his own job and our government is astonishing! I weep for civility #imiss44 🇺🇸

Easily, the most petty, unpresidential act in American history.