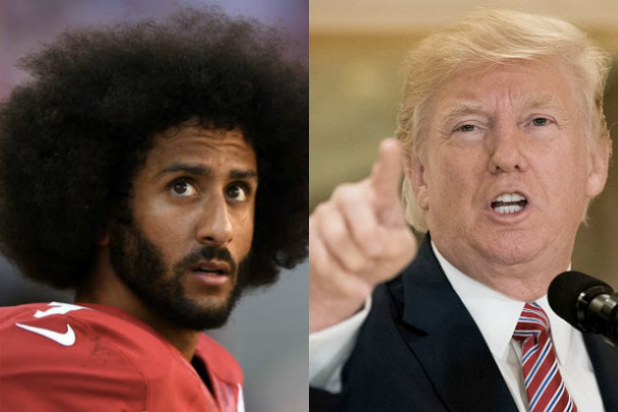 President Trump took a few moments Friday night during his speech at a rally for Alabama Senate candidate Luther Strange to talk about professional football players who participate in protests against police brutality by kneeling during the national anthem. Specifically, Trump suggested that the NFL should fire them.

“Wouldn’t you love to see one of these NFL owners, when somebody disrespects our flag,” Trump said, “to say ‘get that son of a b—h off the field’ right now, out! He’s fired?'”

“He’s fired!” Trump continued. “You know, some owner is gonna do that. He’s gonna sat ‘That guy that disrespects our flag, he’s fired.”

Trump added that he thinks owners who did this would be “the most popular person in the country.”

Watch a clip of his remarks below.

Trump wishes NFL owners would tell anthem protesters "get that son of a bitch off the field right now" pic.twitter.com/gq4EH3lNoY

And read a transcript here.

Trump’s remarks were in reference to NFL players like former San Francisco 49ers quarterback Colin Kaepernick who kneel during the national anthem to protest police brutality. Kaepernick is widely believed to be subject to a league blacklisting for his political views — since being let go by the 49ers, he has been unable to find work with another team.

This marks the second time in two weeks that the Trump administration has said that someone should be fired for expressing their political opinions. White House Press Secretary Sarah Huckabee Sanders was recently hit with an ethics complaint for saying that ESPN host Jemele Hill’s comment that Trump is a “white supremacist” is a “fireable offense.”

U.S. federal law prohibits certain government employees — including an executive branch employee — from influencing the employment decisions or practices of a private entity or company “solely on the basis of partisan political affiliation.”

Trump also seemed to suggest that the league has experienced a ratings decline due to increased safety standards. “That’s what [football players] want to do. They want to hit. They want to hit! [Not letting them] is hurting the game!”

However, Trump said he believes the real culprit for what he says is the NFL’s ratings problem is “people taking the knee when they’re playing our great national anthem.”

Trump then appeared to call on his supporters to boycott professional football. “The only thing you could do better is if you see it, even if it’s one player, leave the stadium. I guarantee things will stop. Things will stop. Just pick up leave.”