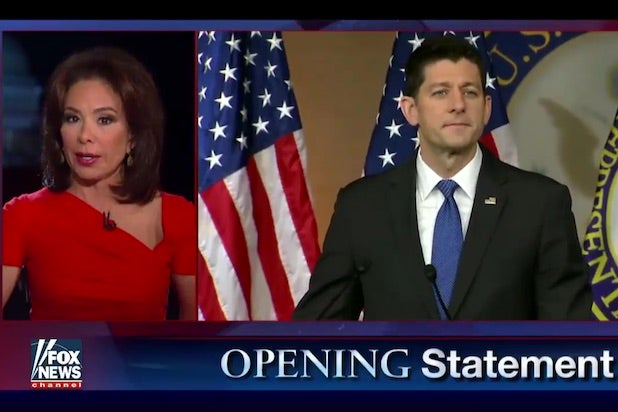 Eyebrows raised Saturday night when Fox News’ “Judge Jeanine” called for Paul Ryan to step down as Speaker of the House… just hours after President Trump told his 27 million Twitter followers to watch her show that evening.

Later that night, former prosecutor Jeanine Pirro kicked off her show “Justice with Judge Jeanine” by coming down hard on Ryan for his failure to deliver the votes to repeal the Affordable Care Act and replace it with his health care bill.

“Paul Ryan needs to step down,” she said in her opening remarks. “The reason? He failed to deliver the votes on his health care bill … The one that he had seven years to work on … The one that had to be pulled to prevent the embarrassment of not having enough votes to pass.”

Pirro went on to place blame solely on Ryan’s shoulders: “I want to be clear. This is not on President Trump. No one expected a business man to completely understand the nuances, the complicated ins and outs of Washington and its legislative process.”

Her chastising continued, calling Ryan’s proposed replacement bill a “total and complete failure,” asking how he could have so badly misjudged the outcome, when Trump’ put their faith in him.

“I can only imagine that he and his aides took on health care because they believed you [Ryan] had his back, and you didn’t,” she blasted.

Viewers couldn’t help but question the timeline of events:

Trump tweeted a promo for Judge Pirro's Fox show this AM, reason unclear.

Tonight, she began her show calling for Ryan to resign.

To be clear, Trump has said since AHCA died that he doesn't blame Ryan. But it is strange for Trump to tweet a Fox promo without reason. https://t.co/5GC2PMdDqQ

Trump told people on Twitter to watch @JudgeJeanine. She began her show calling for Speaker Ryan to resign. Coincidence? I'm sure!