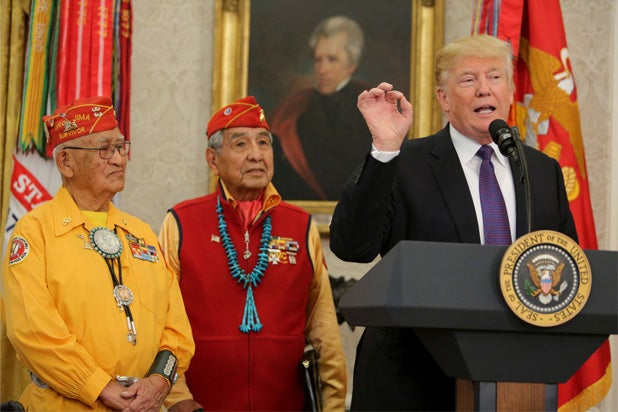 President Donald Trump has resurfaced his favorite nickname for Sen. Elizabeth Warren, which has been widely criticized as racist — this time while honoring a group of Native American veterans in the Oval Office on Monday.

“You were here long before any of us were here,” Trump said to the Navajo Code Talkers, who used a code to communicate messages during WWII. “Although we have a representative in Congress who they say was here a long time ago. They call her Pocahontas. But you know what? I like you,” Trump added, patting the shoulder of one of the veterans.

People on Twitter took notice — that Trump used the offensive nickname, not only among a group of Native Americans, but also in front of a portrait of President Andrew Jackson, who played a large role in not only pushing thousands of Native Americans from their homes, but killing many in the process.

Warren responded later on MSNBC that it’s unfortunate Trump can’t honor heroes “without having to throw out a racial slur.” Warren has claimed Cherokee and Delaware Indian heritage, but it hasn’t been verified.

When asked whether the comment was a racial slur during the daily White House press briefing, spokesperson Sarah Huckabee Sanders said, “I think that’s a ridiculous response” and said “it certainly was not the president’s intent.”

Sanders on Trump’s 'Pocahontas' comment: "What most people find offensive is senator Warner lying about her heritage to advance her career"; says it's a "ridiculous response" to see Trump's remark as a racial slur. (via ABC) pic.twitter.com/gXyjgHsn1T

“I think what most people find offensive is Sen. Warren lying about her heritage to advance her career,” Sanders said. “Look, I think the president certainly finds an extreme amount of value and respect for these individuals, which is why he brought them and invited them to come to the White House and spend time with him, recognizing them and honoring them today. So I think he is constantly showing ways to honor those individuals.”

People on Twitter were not satisfied with Huckabee Sanders’ defense. See reactions below.

Well that's something else SHS says it's Elizabeth Warren's fault for lying about her heritage and calling her Pocahontas wasn't a racial slur. FOH Huckabee Sanders #PressBriefing

Sarah Huckabee Sanders told reporters in White House daily press briefing that saying Pocahontas is NOT a racial slur! THAT is a KKK talking point, btw.

Calling Elizabeth Warren “Pocahontas” is very offensive and certainly intended as a racial slur. Trump is a racist. Huckabee Sanders is lying for a racist. #pressbriefing