President Donald Trump tweeted a very sweet “welcome home” message regarding First Lady Melania Trump, who was hospitalized this past week with a kidney condition. Too bad he misspelled her name.

“Great to have our incredible First Lady back home in the White House. Melanie is feeling and doing really well. Thank you for all of your prayers and best wishes!” read the Saturday tweet.

Yes. You read that correctly. “Melanie.” 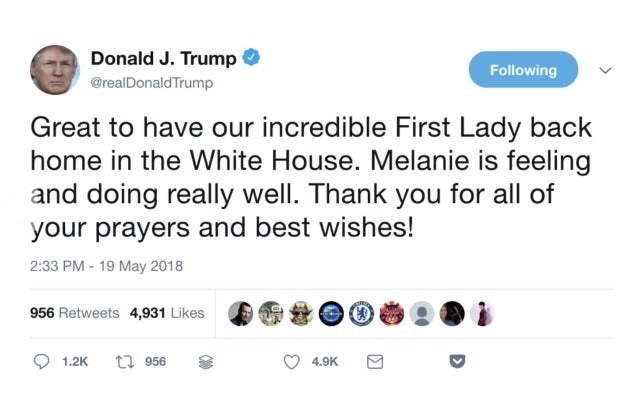 The post was deleted and replaced moments later with the typo corrected. “Melanie” was out and “Melania” was in.

Great to have our incredible First Lady back home in the White House. Melania is feeling and doing really well. Thank you for all of your prayers and best wishes!

I hope Melanie-gate inspires Trump to get Apple to do something about their out-of-control autocorrect software.

…and most wished the first lady a speedy recovery, others — including Howard Stern and Kathy Griffin — couldn’t help but poke fun at the president.

“Relaxing with the cats and my wife Bith,” wrote the shock jock, referring to his wife Beth.

Relaxing with the cats and my wife Bith.

While Griffin had an entirely different “Melanie” in mind.

Nothing but respect for our incredible First Lady Melanie. pic.twitter.com/glmXUQdAn6

People are joking about Trump misspelling his wife's name as "Melanie," but if you look at any keyboard, the letter "e" is right next to "I don't care how this broad spells her name."

Alright I’ve said In the past that spelling errors in tweets shouldn’t be the focus…but you gotta spell your own wife’s name correctly. “Melanie” pic.twitter.com/V4WCrgoKcU

Sometimes I think POTUS misspells things just to troll. So we point it out, he deletes his tweet & then we just all "this tweet is unavailable" on our profiles. I don't really think this. But it has crossed my mind.

“Melania’s cat Melanie is also home from the hospital and that’s who he was referring to…” pic.twitter.com/j36L9s85eb 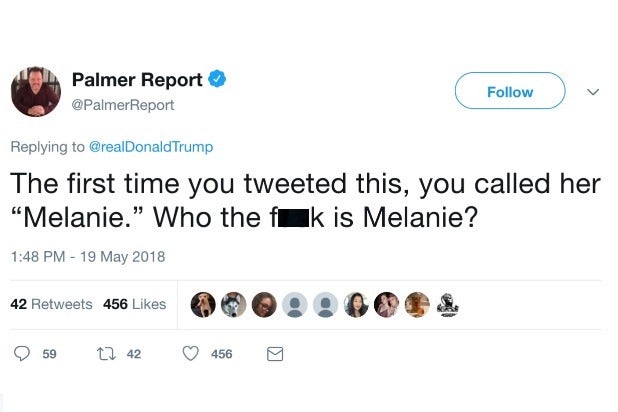 Does Melania know about this Melanie person?

If at first you can’t spell your third wife’s name try, try again

The first lady underwent “an embolization procedure to treat a benign kidney condition,” the White House said in a statement Monday. The procedure was successful and there were no complications, but the FLOTUS remained at Walter Reed National Military Medical Center for the duration of the week.