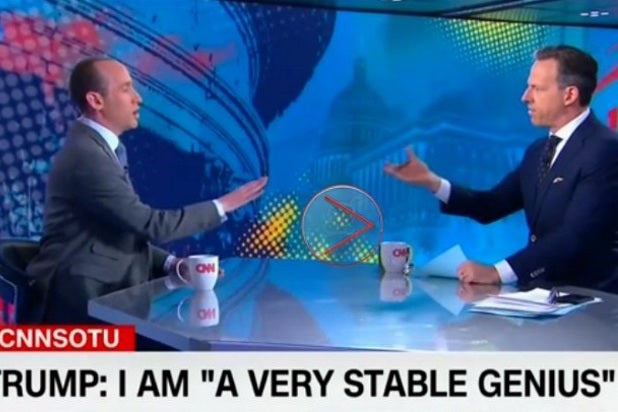 White House adviser Stephen Miller’s performance on Sunday’s “State of the Union” was applauded by President Donald Trump, who said Miller “destroyed” host Jake Tapper and calling the anchor a “CNN flunky.” However, not everyone saw it that way.

The tense exchange when Miller refuted passages in Michael Wolff’s book “Fire and Fury,” in which former White House Chief Strategist Steve Bannon was quoted as saying that it was “treasonous” for Jared Kushner, Paul Manafort and Donald Trump Jr. to meet with a Russian lawyer at Trump Tower in 2016. Although Bannon reaffirmed his support for Trump on Sunday, Miller criticized him, saying his influence during his time inside the Trump administration has been “greatly exaggerated.”

“It’s tragic and unfortunate that Steve would make these grotesque comments so out of touch with reality and obviously so vindictive,” Miller said. “(Bannon’s) role has been greatly exaggerated, whereas the President hasn’t gotten the due that he deserves for the movement that he put together to tap into the kinds of people whose life concerns don’t get a lot of attention on CNN.”

On Twitter, Trump and his supporters praised Miller’s appearance, with the President gloating about how Miller “destroyed” Tapper and calling the anchor, who regularly critices Trump, a “CNN flunky.”

But Trump’s critics and other media figures saw it quite differently, as they praised Tapper for cutting the interview short and throwing Miller off the show after he refused to answer questions. “I think I’ve wasted enough of my viewers’ time. There’s one viewer that you care about right now and you’re being obsequious,” Tapper told Miller, referring to Trump.

Trump supporters and critics respectively praised Miller and Tapper for the combative segment. See some of their tweets below.

Jake Tapper of Fake News CNN just got destroyed in his interview with Stephen Miller of the Trump Administration. Watch the hatred and unfairness of this CNN flunky!

Stephen Miller turns on turncoat Bannon, gets a pat on the head from Trump. There’s no longer any pretense a White House aide works for the American people rather than simply Trump, and what was once a position of distinction is now that of courtier, sycophant or family retainer.

Stephen Miller is trending, for the most glorious reason. Bravo, @jaketapper.

It was very sad to see Jake Tapper, whose book on Afghanistan I really admire, be so condescending and unself aware with stephen miller

Now that I’ve finished Michael Wolff’s book, I can say: nothing could possibly underscore the truth of Wolff’s portrayal of Trump, and of how Trump’s staff humiliates themselves to please him, more than Stephen Miller’s performance on @JakeTapper‘s show https://t.co/d4WfrSsWXx

Now that I’ve finished Michael Wolff’s book, I can say: nothing could possibly underscore the truth of Wolff’s portrayal of Trump, and of how Trump’s staff humiliates themselves to please him, more than Stephen Miller’s performance on @JakeTapper‘s show https://t.co/d4WfrSsWXx