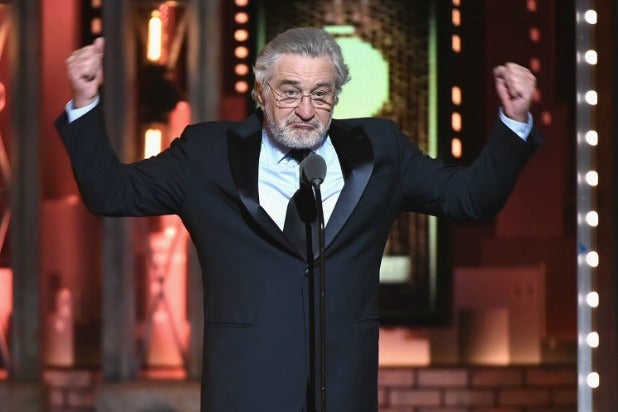 Donald Trump answered Robert De Niro’s Tony Awards “f— Trump” remarks by calling him a “very low IQ individual” who has received “to [sic] many shots to the head by real boxers in movies.”

Yes: He managed a typo while insulting the intelligence of the Oscar winner, who played a boxer in the 1980 classic “Raging Bull” and the less-beloved 2013 film “Grudge Match.”

“I watched him last night and truly believe he may be ‘punch-drunk,'” Trump tweeted. “I guess he doesn’t……realize the economy is the best it’s ever been with employment being at an all time high, and many companies pouring back into our country. Wake up Punchy!,” he went on say in a separate tweet.

On  Sunday, De Niro used the F-word in an anti-Trump outburst late during the 72nd Annual Tony Awards.

“I’m gonna say one thing, ‘F– Trump!'” the actor shouted after walking on the stage of Radio City Music Hall to introduce a performance by special Tony winner Bruce Springsteen. De Niro then pumped both fists beside his head — eliciting a standing ovation from many in the audience.

The irony of the president calling De Niro “very low IQ,” while misspelling the word “too,” wasn’t lost on Twitter critics.

Another user wrote: “Today our President @realDonaldTrump called Robert DeNiro “… a very Low IQ individual.” Interesting commentary from someone who doesn’t know the difference between “to” and “too”.

we must cherish times like these – donald trump declaring De Niro a ‘very low IQ individual’ before writing ‘to many’ instead of ‘too many’ . a beautiful moment https://t.co/eMvb87SQDD

Speaking of low IQ individuals ….. don't you ever find a new line to insult people who speak truth to power? What a fragile little narcissist you are. #SAD BTW, everybody loved Robert De Niro #Toronto and cheered him when he apologized for you! pic.twitter.com/GnWg4xth6U

*can’t tell the difference between too and to*

U & your "low IQ" bullshit….hahaa… De Niro can probably run circles around u even when he's drunk!

…realize the economy is the best it’s ever been with employment being at an all time high, and many companies pouring back into our country. Wake up Punchy!