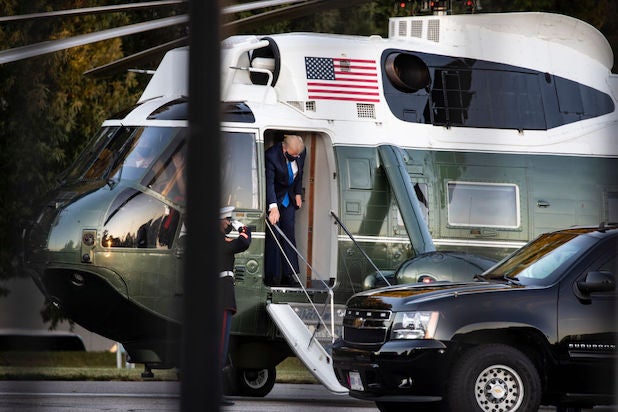 President Trump was taken to Walter Reed National Military Medical Center “out of an abundance of caution,” the White House said on Friday after Trump developed symptoms following his positive COVID-19 test.

“Out of an abundance of caution, and at the recommendation of his physician and medical experts, the President will be working from the presidential offices at Walter Reed for the next few days,” Press Secretary Kayleigh McEnany said in a statement.

In a brief video, filmed at some point Friday afternoon but released shortly after he departed the White House for Walter Reed, Trump said, “I think I’m doing very well, but we’re going to make sure that things work out.”

A White House spokesperson also said there would not be a transfer of power from Trump to Vice President Mike Pence while the President was at the hospital.

Late Friday night, Sean Conley, physician to the president, said in a statement that Trump is “doing very well,” and has not needed supplemental oxygen. Conley said also that Friday night, Trump has received his first dose of Remdesivir therapy.

Earlier on Friday, Trump’s physician issued a letter that said the president took a “single 8 gram dose of Regeneron’s polyclonal antibody cocktail” — an experimental treatment — as well as zinc, vitamin D, famotidine (the generic name for Pepcid), melatonin and aspirin. The letter described Trump as “fatigued but in good spirits” and First Lady Melania Trump as having a “mild cough and headache.”

According to two people close to Trump who spoke with the New York Times, the president has a “low-grade fever, nasal congestion and a cough.”

The White House strictly limited the video feed of Trump walking out to Marine One, but journalists at the scene released images shortly after.