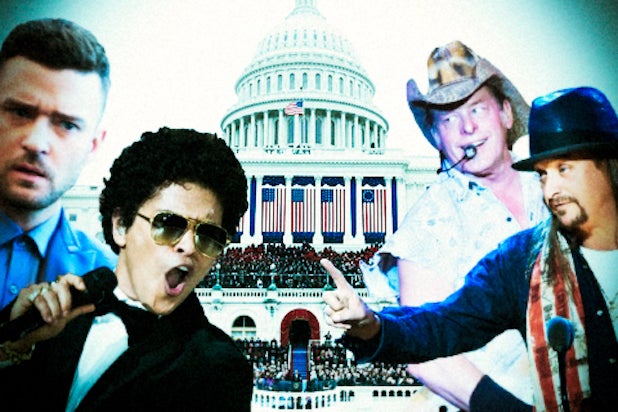 Donald Trump’s inaugural committee is scrambling to lock in A-list Hollywood performers for the parties celebrating him — and having a rough time booking big names, two insiders tell TheWrap.

Both said that Trump inaugural committee members have contacted them in recent days offering cash or even a government appointment if they could deliver marquee names.

“They are willing to pay anything,” one of the insiders told TheWrap. “They told me, ‘We’ll pay their fees.’ Most of these artists’ fees are in the six to seven figures.” The insider said the Trump negotiator also offered to pay him for delivering top talent, saying, “Name your price.”

“I couldn’t do it,” the insider said. “Not even for a billion dollars.”

“No one with any official position at, or official relationship with, the Presidential Inaugural Committee, is engaging in the conduct described,” said Boris Epshteyn, spokesman for Trump’s Presidential Inaugural Committee. “We are focused on organizing an exciting and uniting celebration of freedom and democracy while following all rules, regulations and appropriate standards of conduct.”‎

Another insider said the inauguration may already have some high-profile acts booked. The insider said two of his clients and one other high-profile musician have already agreed to perform, though he wouldn’t name them. He added that his clients were not being paid except for transportation and accommodations — which can rise into six-figures amounts for big names.

A third insider, a veteran inaugural organizer, said it is unusual to pay artists for the inauguration, considered a high-profile, high-prestige, patriotic gig.

The organizer told TheWrap that neither Beyonce, who famously performed a rendition of “At Last” during Barack and Michelle Obama’s first dance at the 2009 inaugural ball and the national anthem at the 2013 inauguration, nor Aretha Franklin, who sang at Obama 2009 swearing in ceremony, were paid anything other than production and travel expenses.

“You can add this to the long list of Trump team activities that break from the accepted norms,” said Jenn Topper, a spokeswoman for the Sunlight Foundation, a nonpartisan nonprofit that works on transparency and accountability in government. “Without knowing more specifics about the arrangements, it’s difficult to say whether this would violate ethics laws or rules, but it certainly raises questions.”

When the first Hollywood insider quoted in this story declined to take part, Trump’s team asked him to reconsider, he said. He was told that the Inaugural Committee was in talks with Kid Rock, Ted Nugent, Lee Greenwood and possibly Garth Brooks.

But, according to the insider, the inauguration team is hoping for “artists like Justin Timberlake and Bruno Mars,” adding: “They’re calling managers, agents, everyone in town to see who they can get, and it’s been problematic.”

Representatives for Nugent and Greenwood did not immediately respond to TheWrap’s request for comment. A representative for Rock declined to comment. Brooks’ publicist said she needed to speak to Brooks and couldn’t comment.

Brooks previously told TMZ he’d be open to performing at Trump’s inauguration if asked, and Brooks has a history with Trump supporter and inaugural organizer Steve Wynn, who in 2009 signed Brooks for a reported multi-million dollar four-year residency at one of his Las Vegas properties.

Hollywood is famously left-leaning, and during the presidential campaign, Hillary Clinton had far more celebrity supporters than Trump.

One of the insiders who spoke to TheWrap, a talent manager, said he doubts there are too many high-caliber performers “who will agree to normalize and service some of the hate groups that have supported Trump,” because they run the risk of intense backlash.

Last month, the New York Times reported that a representative for Elton John, who supported Clinton, issued a stern statement denying his client had agreed to perform at the inauguration after a member of Trump’s transition team said the “Rocket Man” singer would take the stage.

“Incorrect. He will NOT be performing,” the publicist wrote, using all-caps for good measure.

Taxpayers cover the cost of the inaugural swearing-in, security and parade, but the swanky inaugural balls and celebrations that follow are paid for by private donations.

The Times said Trump’s team is hoping to raise a record $65 million to $75 million to finance the inaugural balls and festivities. Big stars can help sell tickets to donors, which according to the Times can run anywhere from $25,000 to a $1 million.

Now that he’s president, Trump may have an easier time drawing talent than he did at the Republican National Convention, when Scott Baio was one of his biggest celebrity guests.

“He promised the biggest and the best entertainers,” an insider said. “He got Chachi and Antonio Sabato Jr.”