What it didn’t have is Hollywood glamour.

Celebrities have long been a staple of Washington state dinners. But unlike, say, the Obama years, which featured the likes of Beyoncé, Steven Spielberg and James Taylor, this year’s event was low on star wattage, with the Washington National Opera serving as the featured entertainment.

Except for Melania Trump’s broad-brimmed white hat earlier in the day — which drew immediate comparisons to “Scandal’s” Olivia Pope — perhaps the closest Hollywood connection at the state dinner was movie-financier-turned-Treasury Secretary Steven Mnuchin. 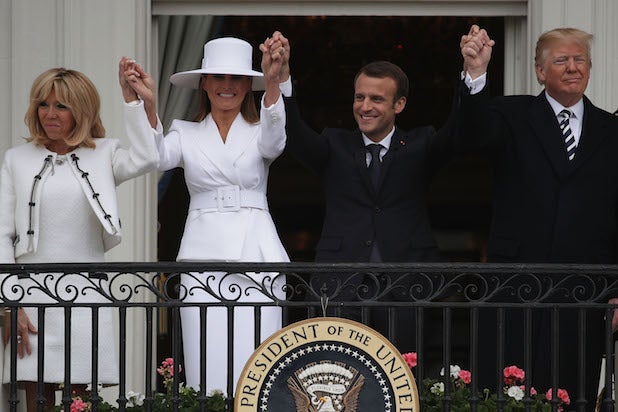 In contrast, the Obama’s first state dinner for then-Indian Prime Minister Manmohan Singh and his wife Gursharan Kaur in 2009 was held in a tent on the South Lawn of the White House and included Steven Spielberg, Katie Couric, Blair Underwood and Alfre Woodard, among others.

It was also the year when a couple of party crashers made headlines: Tareq and Michaele Salahi. The Washington socialites filming “Real Housewives of D.C.,” made a splashy entrance despite not being on the list.

The Obamas’ roster of Hollywood celebs famously included Beyoncé, who headlined the 2010 state dinner for Mexico’s then-president Felipe Calderón and his wife, Margarita Zavala. Angela Merkel had a friend in James Taylor during her state dinner in 2011. And Mary J. Blige had some real love for Macron’s predecessor, François Hollande during his state dinner in 2014.

Other celebrities attending state dinners during the Bush years include country crooner Kenny Chesney in 2006, famed violinist Itzhak Perlman in 2007 and the Broadway production of “The Lion King” in 2008.

Spent yesterday with my team checking on the final details of our first State Dinner with France. pic.twitter.com/vHoQ1rTA3s

Is Melania Trump’s white hat a symbol of morality like Olivia Pope’s? pic.twitter.com/JZRHL7iuOi