Tucker Carlson has been made fully aware of where he stands in the eyes of Dan Bailey from Montana. When the two unexpectedly met in a fishing store over the weekend, Bailey gave the host every piece of his mind, straight to Carlson’s face.

Bailey, a fly fishing guide from the area, posted a video of his encounter with Carlson on his Instagram after the fact. The video appears to start mid-confrontation and lasts less than 30 seconds. 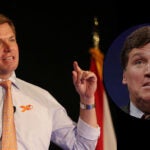 For his part, Tucker Carlson tried to defuse the situation, telling Bailey that he wasn’t going to get into a debate and saying “Settle down, son.” At that, Bailey visibly bristled in offense and continued to follow Carlson around the store.

Bailey explained his actions in the caption of his post saying, “It’s not everyday you get to tell someone they are the worst person in the world and really mean it! What an asshole! This man has killed more people with vaccine misinformation, he has supported extreme racism, he is a fascist and does more to rip this country apart than anyone that calls themselves an American.”

“Ambushing Tucker Carlson while he is in a store with his family is totally inexcusable — no public figure should be accosted regardless of their political persuasion or beliefs simply due to the intolerance of another point of view,” a spokesperson for Fox News told TheWrap.

A rep also directed TheWrap to Lachlan Murdoch’s support of Carlson when the anti-defamation league called for his firing earlier this year.

After the video went viral, Donald Trump Jr. lashed out at Bailey on Twitter, musing that he’s “the model for the new Pregnant Male Emoji.”

In a statement from the store itself, it was made clear that Bailey was not an employee of the store he and Carlson were in at the time of the confrontation, despite sharing a name.

“On July 23rd, a well-known television personality, Tucker Carlson, was affronted while shopping at Dan Bailey’s Outdoor Company. Coincidentally, the person engaging Mr. Carlson was a local resident named Dan Bailey,” the statement reads. “This person has no affiliation with our business, other than share the same name as our founder, who passed away in 1982. To be clear, we treat every customer equally and respectfully. Our staff was professional and cordial to Mr. Carlson, as we are with all of our customers.”

You can watch the encounter between Dan Bailey and Tucker Carlson in the video above.