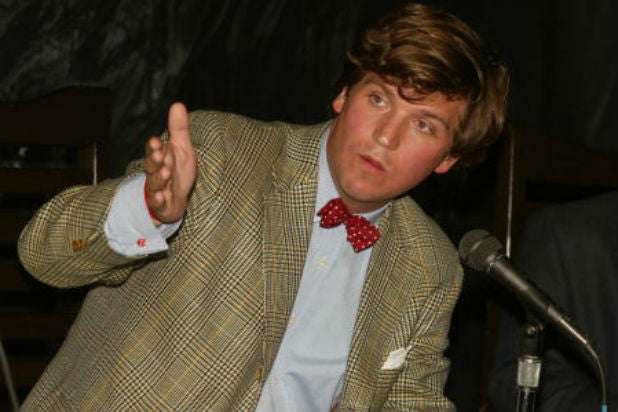 Brit Hume tweeted the news that has been confirmed by TheWrap. He has been filling in for Van Susteren since she abruptly left the network earlier this year. Carlson’s new show starts Nov. 14.

Van Susteren left the network in September, later explaining that it “has not felt like home to me for a few years.” The former “On the Record” host added, “I took advantage of the clause in my contract which allows me to leave now. The clause had a time limitation, meaning I could not wait.”

Great news! @TuckerCarlson will take over On the Record after the election as the new host. Congratulations to him. Terrific choice!

The conservative Carlson is considered a favorite of 21st Century Fox executive chairman Rupert Murdoch and the move is a sign that Fox News doesn’t plan to scrap the right-leaning opinion shows that have been successful for the last 20 years in prime time.

Carlson founded The Daily Caller, a conservative news website. The L.A. Times reported that he would “likely take a passive ownership role” in the site once his new TV hosting duties begin.

The new program won’t necessarily be titled, “On The Record,” which occupied the timeslot under both Van Susteren and Hume. Carlson joined Fox News as a contributor in 2009 and became a co-host on the weekend edition of “Fox & Friends” in 2013.

“I count Greta a friend and I’m sorry to see her go,” Hume told viewers back when he first took her spot. It’s known in media circles that the 73-year-old Hume didn’t want the job on a permanent basis and was simply stepping in through the election.

Hume’s next move will be a handoff to Carlson.