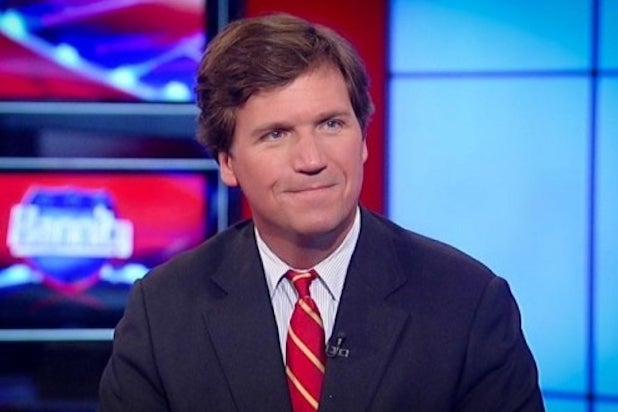 Paid advertisements for “Tucker Carlson Tonight” have dropped a whopping 61 percent since liberal group Media Matters for America unearthed old recordings in which Carlson made disparaging comments about women and minorities, a new analysis shows.

According to data company Samba TV, the show went from 36 advertisers on the Monday before the release of the tapes to 14 advertisers the day after.

Carlson remains the most-watched show at 8 p.m. in all of cable. But more than 30 advertisers have pulled their ads since December, when Carlson said that “an endless chain of migrant caravans” was making “our own country poorer, and dirtier, and more divided.” Media Matters has called on people to boycott businesses that advertise on the show.

Fox News declined to comment Wednesday, but has criticized the Media Matters campaign as politically motivated.

The drop in advertisers appears even more dramatic when compared to a year ago. As of the second Monday of March 2018, the show had 54 advertisers. The 14 advertisers on Carlson’s Monday, March 11 show, the day after the audio was released, represent a 74 percent drop.

Before the boycott, Carlson’s show featured ads by giants such as IBM, Ford, Subaru, Infinity, GMC, Lincoln and Volvo.

On Monday, as Carlson steadfastly proclaimed that Fox News was standing by him, the only big-name national brand featured on his commercial breaks was pharmaceutical company Bayer.  (Bayer’s ads were missing from Tuesday night’s show. The company did not respond to multiple requests for comment by TheWrap).

The most prominent brand ads on Carlson’s Monday show were for PODS portable storage, the anti-virus software PC Matic, and a whole lot of MyPillow, a bedding company owned by a proud Trump supporter. The show ran two separate MyPillow ads, each lasting two minutes. It also had only four commercial breaks, down from the usual five.

Tuesday night’s episode was similar, with eight advertisers, 75 seconds of promos, and seven commercials lasting either one or two minutes, an oddity in primetime cable news.

MSNBC’s “All In With Chris Hayes,” which airs opposite Carlson, had 23 advertisers on Monday night, despite 41 percent lower ratings in 2019 so far.

Carlson’s show also slipped in demo ratings, drawing 2.895 million viewers, with 495,000 of those in the key adults 25-54 demographic. Those numbers topped all of Tucker’s cable news competition, but were down from his quarter-to-date averages.

“This is a sizable fall-off in advertisers,” Brad Adgate, a media analyst and former advertising executive, told TheWrap. “This doesn’t seem to be blowing over.”

Also Read: Tucker Carlson Once Called Fox News 'A Mean, Sick Group of People' Back in 2003

“When you’ve cut back on the number of commercial breaks and most of your non-programming time is spent on promos or direct response ads for a show that’s one of your top rated programs, that’s not going to help you financially,” he added.

Media Matters culled the audio from appearances Carlson made on shock jock Bubba the Love Sponge’s radio show between 2006 and 2011. Carlson defended Utah polygamist Warren Jeffs, a cult leader who is serving a life sentence for child rape, calling the charges against him “bulls–t.”

Carlson went on to argue that “arranging a marriage between a 16-year-old and a 27-year-old is not the same as pulling a stranger off the street and raping her.”

Carlson has declined to apologize.

“Media Matters caught me saying something naughty on a radio show more than a decade ago,” he said. “Rather than express the usual ritual contrition, how about this: I’m on television every weeknight live for an hour. If you want to know what I think, you can watch. Anyone who disagrees with my views is welcome to come on and explain why.”

Last month, Fox News told TheWrap the network hasn’t lost any money because of Media Matters or other groups critical of its coverage. Despite boycotts, Fox News generated about $2.6 billion in revenue in 2018, a record year for the network.

“We cannot and will not allow voices like Tucker Carlson to be censored by agenda-driven intimidation efforts from the likes of Moveon.org, Media Matters and Sleeping Giants. Attempts were made last month to bully and terrorize Tucker and his family at their home,” Fox News said. “He is now once again being threatened via Twitter by far left activist groups with deeply political motives. While we do not advocate boycotts, these same groups never target other broadcasters and operate under a grossly hypocritical double standard given their intolerance to all opposing points of view.”

Tony Maglio has contributed to this report. A previous version of this post said the percent drop in advertisers was 39. It is 61.