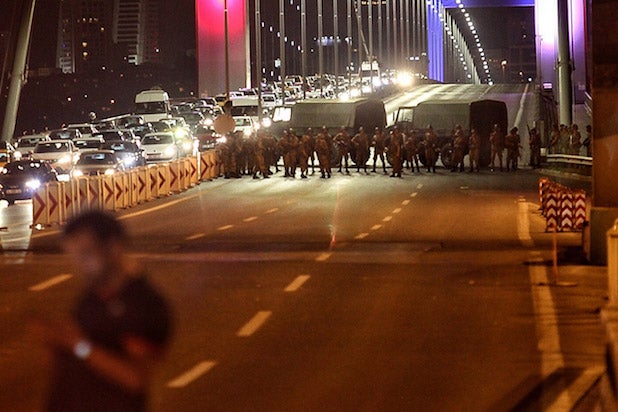 Turkey remained in chaos Friday night as the military attempted to seize control of the country in a forceful coup.

President Recep Erdogan has called on Turkish citizens to take to the streets to show their support of the government, but instances of violence have erupted across the country between the military, police and citizens.

Along with horrifying video footage showing a tank crushing a car in the streets of Istanbul as Turkish citizens helplessly fight back with sticks, scenes of horror and mayhem have been captured by countless social media users across the country.

See some of the most disturbing videos and photos below. Other extremely graphic videos have been released including one on Reddit that depicts a man with his head completely blown off.

Erdogan supporters have gone to Turkish consulates in Austria to protest the coup.

Also Read: Turkey Coup: What We Know So Far

One account tweeted a video which appears to show gunfire being shot from a helicopter.

More instances of gunfire in the city of Ankara.

A military tank can be seen running right over a taxi as a crowd gathers around, with some people trying to hit the tank with large sticks.

Military tanks continue to drive through the streets of Ankara.

MORE: Tanks Continue To Roll Through The Streets Of Ankara.

In Istanbul, a video shows a group of anti-coup citizens seizing control over a military tank.

Citizens have also gathered in Taksim Square in Istanbul to protest the coup.

A man lies in front of a moving tank.

Our latest pictures as the military attempts a coup in Turkey https://t.co/NEXj31VQYM pic.twitter.com/IYyKWzEthE