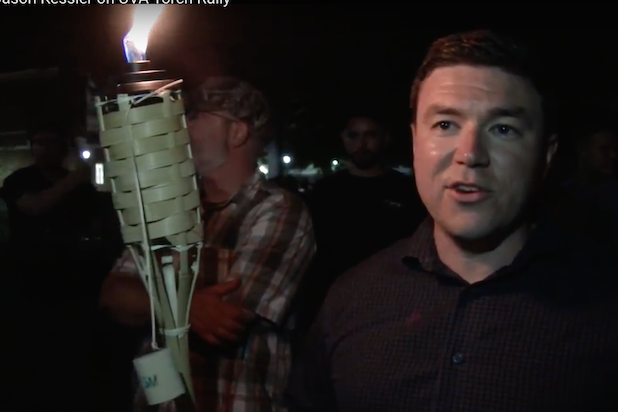 Earlier this week, Twitter verified Jason Kessler, the white nationalist and principal organizer behind the “Unite the Right” rally in Charlottesville, Virginia, that left one dead in August — and many people are unhappy about it.

Strictly speaking, Twitter verification is not an endorsement of views. According to the social media company’s own guidelines, the blue check simply means that an account “of public interest is authentic.”

But in practice, Twitter routinely uses the verification badge as a mark of legitimacy and is willing to withhold it from certain highly influential accounts of public interest — like Julian Assange.

Looks like I FINALLY got verified by Twitter. I must be the only working class white advocate with that distinction. pic.twitter.com/IMXqtmhgvn

Needless to say, the social media platform promptly exploded with news that Kessler had joined the exclusive club — particularly given some of Kessler’s tweets in the aftermath of the deadly demonstration in Charlottesville.

Kessler tweeted that the victim, Heather Heyer, “was a fat, disgusting Communist,” adding, “Communists have killed 94 million. Looks like it was payback time.” At the time, he also linked to an article from the Neo-Nazi website Daily Stormer.

Hey @jack: very active user, 2.1M followers here: this is disgusting. Verifying white supremacists reinforces the increasing belief that your site is a platform for hate speech. I don't want to give up Twitter, but I may have to. Who do you value more, users like me or him? https://t.co/5ymcNfFvH0

I'm not asking them to censor speech. I'm asking them to remove the tacit endorsement a checkmark confers. Endorsement may not be their intention, but it's the effect. https://t.co/kF31DzYgdX

Why isn't Julian Assange verified? Once they took that stand, they essentially decided that some users' views were too odious for verification. I'm only asking the same for Nazis. https://t.co/h4oAUghjmK

Though he was hardly alone.

How do you verify Jason Kessler, thus giving him a place of distinction, and, at the same time, tell people of color that they are safe on Twitter? How @jack and @TwitterSupport?

To take a more aggressive stance in our rules…

Kessler organized the largest white supremacist rally of my lifetime, and left 1 woman dead. He did it using Twitter https://t.co/ueETTkMAoT

Wonder what information Jason Kessler submitted to Twitter to meet this requirement for verification: https://t.co/TtEoN1LpK8 pic.twitter.com/wIXcej8Jc3

Oh wait my bad @jack my bad. Nazis are ok for another couple weeks. I’ll follow-up w/you about your verification of Jason Kessler, known Nazi & organizer of rallies that end in murder, on the 22nd. pic.twitter.com/qyprrCRWYq

Twitter has verified Jason Kessler, the white supremacist organizer of the Charlottesville rally. The message is clear. Hate groups will roam free on this platform. Shameful. pic.twitter.com/C3tLOoRq50

Donald Trump's penchant for Twitter rants, adjusted history and occasionally claiming to coin phrases has kept fact-checkers busy for months. But none are quite so expertly cheeky as those running the Twitter account for the Merriam-Webster Dictionary. Here are 12 instances of pitch-perfect corrections and insights for the Trump administration, straight from the dictionary.