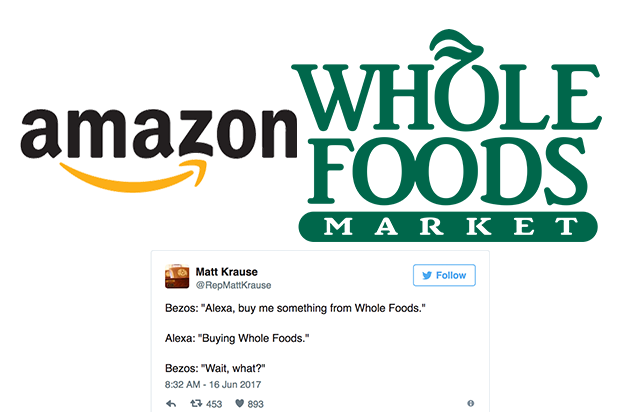 When the news broke that Amazon purchased the grocery retailer Whole Foods — known for often pricy and trendy food items — for $13.7 billion, the stock market wasn’t the only thing lighting up.

People took to Twitter to voice their surprise and other reactions. The jokes were flying faster than Amazon’s stock rose Friday morning — it jumped more than three percent, closing in towards $1,000 a share. And Whole Foods’ stock rose more than 27 percent, coming up to $42 a share.

Probably the most popular joke online after Amazon’s huge acquisition goes like this:

Bezos: "Alexa, buy me something from Whole Foods."

Other Twitter users hoped that their Prime membership on Amazon.com will translate into discounts at the organic foods store, which has gained a reputation for being overpriced. (The store previously made headlines for selling “Asparagus Water,” which appeared to be nothing but a few stalks of raw asparagus and good ol’ H2O, for $5.99.)

More on Twitter imagined a re-organization of the grocery store, with “Customers who bought this, also bought this…” signs above produce.

Check out a roundup of some of the funniest reactions:

Just read about the Whole Foods purchase. Can't wait for Amazon's drones to bring me carrots and couscous.

Damn it. When I read "Amazon buying Whole Foods" I thought they meant her. pic.twitter.com/LBNKxQdycO

Amazon bought Whole Foods and we bought this. pic.twitter.com/0pYzdyEqAb

RT if you have also spent $13.7 billion at Whole Foods recently.

Nice to know I wasn't the only one overcharged by Whole Foods.

right now there are about 10000 tweets with the same "alexa buy me something from whole foods" joke. good luck to whichever one wins

Sooo.. #Amazon just bought out Whole Foods for $13.7 billion.. Does that mean things will be cheaper now since I have prime?

#Amazon bought Whole Foods?? And folks wanna get on Kevin Durant for joining the Warriors. THESE are the superteams ppl should worry about..

I hope #Amazon drones have the same look of pity in their eyes as the Instacart drivers do when they deliver $74 worth of ???? and ???? to me.

To be fair we all know what it feels like to go into @WholeFoods for some milk and walk out having spent $13.7 billion #amazon #wholefoods

#Amazon announced this morning that they are buying #WholeFoods for $13.7 BILLION. Or the cost of one full cart of food from the grocer.