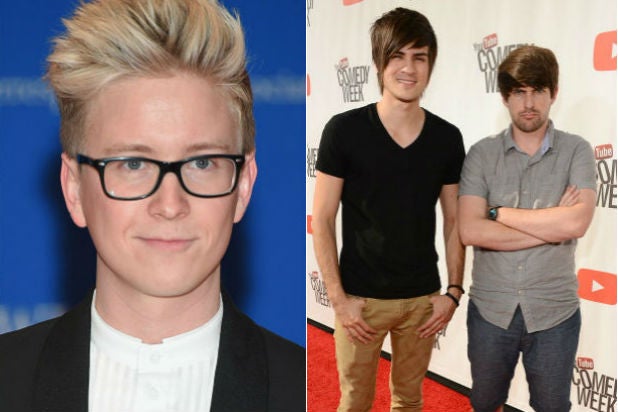 Tubefilter, dick clark productions and VH1 announced the finalists for the Streamys Audience Choice Awards: Entertainer of the Year and Show of the Year on Thursday.

YouTube stars Tyler Oakley and Grace Helbig, who are also hosts of the show, are both nominated for Entertainer of the Year. YouTube comedy Smosh is up for Show of the Year, along with Rooster Teeth and Video Game High School.

Starting today, fans can vote online for their favorite entertainer and show until moments before the winners are revealed live on stage. Fans can cast their vote at the Streamy website or VH1.  Fans can also vote directly on Twitter by including the nominee’s hashtag (#name or #showtitle), the word “vote” and #Streamys in their Tweets.

Ten awards will be presented live at the ceremony. Winners from the remaining categories will be announced prior at the Official Streamys Nominee Reception hosted by Chelsea Briggs and GloZell Green on Sept. 14 at YouTube Space LA in Playa Vista, CA. All Streamy Awards winners will be recognized in the September 17 live show.

The Streamy Awards are a multi-platform event honoring the best in YouTube, online video and the creators behind it. The ceremony will be broadcast live from the Hollywood Palladium on Sept. 17, 2015 at 10pm/9c on VH1 and digital platforms.