A “creepy looking lady,” a “brilliant” time traveler and a “bitch ass” reality TV character got viewers talking passionately on Twitter over the past week.

The Wrap has partnered with Canvs, a language analytics company that measures emotions around content, for a weekly look at the characters and stars that have TV viewers the most worked up. The data below covers June 6-12 and is drawn from the 10 most emotionally reacted-to series airings across broadcast and cable television. 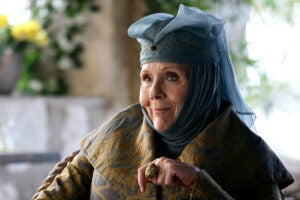 • Olenna Tyrell from “Game of Thrones,” now in its sixth season, triumphed over all other GoT characters in the past week. Lady Olenna (played by Dame Diana Rigg), racked up 2,658 specific Emotional Reactions in the wake of the airing of “The Broken Man,” the seventh episode this season of the HBO fantasy drama. (Given that the eighth episode aired on the evening of the last day of our seven-day measurement window, its story arc and characters will be provoking reactions on Twitter throughout the current week.) What helped put Lady Olenna over the top: a combination of viewers who just don’t care for her (7 percent of her ERs fell into the “dislike” bucket) and those that find her terribly amusing (6 percent of her ERs fell into the “funny” bucket).

Cersei Lannister: we have to work together to defeat the High Sparrow! 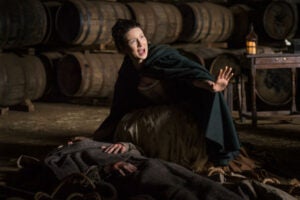 • There were 614 ERs surrounding the Claire Randall character from Starz’s time-travel drama “Outlander” following its June 11 episode “Prestonpans.” But what propelled her onto our list was another 3,774 ERs that name-checked Caitriona Balfe, the striking Irish actress who plays her. Balfe racked up 43 percent of all ERs surrounding “Prestonpans” thanks to her participation in a Starz live-tweet promotion.

• Angela Babicz, a “Bad Girls Club” character played by, well, Angela Babicz, topped her competition on the Oxygen reality show by racking up 1,708 ERs during “Reunion Part 3,” which aired on June 7 — nearly one in five ERs surrounding the episode. Roughly 40 percent of her ERs fell into the “dislike” bucket, which means that Babicz probably knows exactly what she’s doing. But even if she doesn’t, from a reality TV perspective, it’s still working.

Angela such a nut.. #bgc