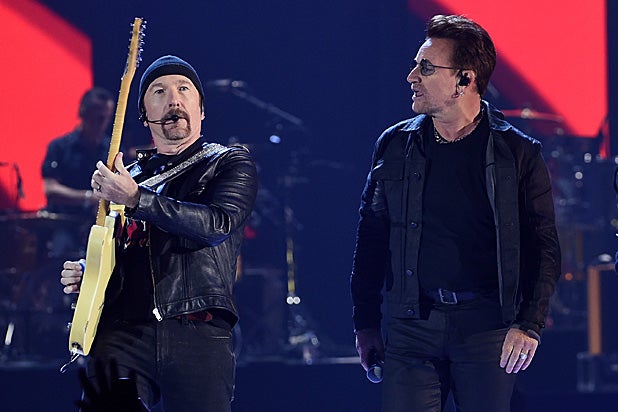 U2 fans rejoiced this week when the Irish rockers announced their upcoming Joshua Tree 2017 Tour, but they’ve got to wait a little longer for the band’s next album — and can blame Donald Trump for the delay.

Guitarist The Edge told Rolling Stone that he and his U2 bandmates needed some “breathing space” after Trump’s presidential election win in order to decide what they wanted to say about his road to the White House.

“We just went, ‘Hold on a second — we’ve got to give ourselves a moment to think about this record and about how it relates to what’s going on in the world,'” the guitarist — who’s real name is David Howell Evans — explained.

“Songs of Experience,” U2’s 14th album, was started before the beginning of 2016 and mostly completed (aside from “a few final touches”) by the end of the year. But “now, as I think you’d agree, the world is a different place,” The Edge said.

Also Read: Bono Raves About 'Sing Street' Stars: 'U2 Were Not as Good'

Asked if he was referring to Trump or Brexit, he replied: “The Trump election. It’s like a pendulum has suddenly just taken a huge swing in the other direction.

“So, anyway, we then were looking at the anniversary of ‘The Joshua Tree,’ and another thing started to dawn on us, which is that weirdly enough, things have kind of come full circle, if you want,” he said. “That record was written in the mid-80s, during the Reagan-Thatcher era of British and U.S. politics. It was a period when there was a lot of unrest … it feels like we’re right back there in a way. I don’t think any of our work has ever come full circle to that extent.”

Also Read: Rebecca Ferguson Will Not Perform at Donald Trump's Inauguration After All

Thus, there’s actually no better time to revisit their blockbuster fifth studio album from 1987 — as they will on every date of their upcoming North American and European tour, kicking off in Vancouver, Canada, on May 12.

“It just felt like, ‘Wow, these songs have a new meaning and a new resonance today that they didn’t have three years ago, four years ago,'” The Edge said. “And so it was kind of serendipitous, really, just the realization that we needed to put the album on ice for a minute just to really think about it one more time before putting it out, just to make sure that it really was what we wanted to say.”

This is far from the first time the politically vocal rock stars have shared their thoughts on Trump.

In September, lead singer Bono said the billionaire was trying to “hijack the idea of America.”

“Look, America is like the best idea the world ever came up with. But Donald Trump is potentially the worst idea that ever happened to America, potentially,” Bono told “CBS This Morning” host Charlie Rose, Billboard reported.

“It could destroy it … America is an idea, and that idea is bound up in justice and equality for all — equality and justice for all, you know?… I don’t think he’s a Republican. I think he’s hijacked the party, and I think he’s trying to hijack the idea of America. And I think it’s bigger than all of us. I think it’s — this is really dangerous. People of conscience should not let this man turn your country into a casino.”

At the iHeartRadio Music Festival (pictured above) that same month, U2 changed the lyrics to their 1988 single “Desire” to blast Trump, as an image of him was displayed behind the stage.

“What do you have to lose? Everything!” Bono screamed down the mic at the cheering crowd.