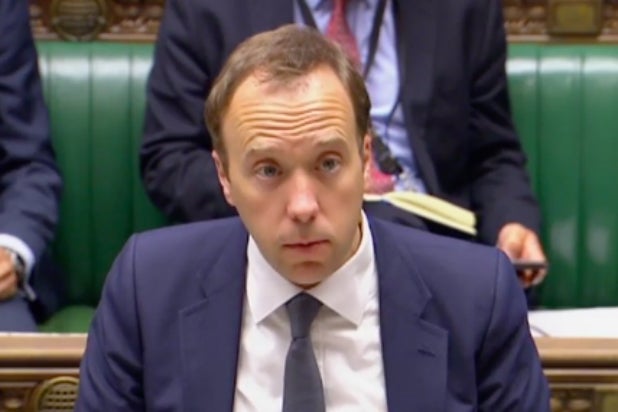 The U.K. government has approved Fox’s bid for Sky — with one big condition — and is also getting out of the way of Comcast’s own offer for the British media company.

We expected that latter decision would be the case, and Matt Hancock, secretary of state for Digital, Culture, Media and Sport, made it official today.

“The proposed merger does not raise public interest concerns, and so I can confirm today that I will not be issuing an intervention notice,” he told Parliament on Comcast-Sky.

But his predecessor had already issued an intervention notice on Fox-Sky, which was the original merger until Comcast swooped in with a $31 billion offer, so Hancock (pictured above) and the Competition and Markets Authority (CMA) had to look into that one further.

From the CMAs findings, Hancock concluded: “The proposed merger does pass the threshold for a relevant merger situation.”

But he had a condition for that one: Hancock wants Fox to divest Sky News to Disney or to another suitable buyer, with an agreement to make sure that the British journalism jewel is funded for at least a decade. That, he believes, is the best remedy for any public interest concerns about media plurality.

Not everyone in Parliament is on board with Hancock’s opinion — but Fox is. Here is the Murdoch-owned company’s statement on Hancock’s proposal:

21st Century Fox (“21CF”) welcomes today’s announcement by the Secretary of State for Digital, Culture, Media and Sport that he has cleared 21CF’s proposed acquisition of the remaining shares in Sky on broadcasting standards, as recommended by the Competition and Markets Authority (“CMA”).

Regarding the effects on media plurality we note that the CMA recommended to the Secretary of State that divestiture is “the most effective and proportionate remedy.” 21CF has already submitted proposed undertakings to achieve the divestiture of Sky News to Disney. We note that the Secretary of State agrees with this solution and has instructed officials from the Department for Culture, Media and Sport (“DCMS”) to agree final undertakings that he would be prepared to accept and consult on within the two-week timeframe. We now look forward to engaging with DCMS and we are confident that we will reach a final decision clearing our transaction.

Also Read: Disney Must Make Offer to Buy All of Sky If Fox's Own Deal Falls Through

Sky welcomes today’s announcements by the Secretary of State for Digital, Culture, Media and Sport (the “Secretary of State”) regarding the proposed offers for Sky by Twenty-First Century Fox (“21CF”) and Comcast Corporation (“Comcast”).

In respect of 21CF’s proposed acquisition of Sky, Sky notes that the Secretary of State considers that the undertakings provided by 21CF have provided a good starting point to overcome the adverse public interest effects of the proposed merger that he has identified, and that DCMS Officials have now been instructed to seek to agree final undertakings with 21CF. The Secretary of State has stated that, dependent on the outcome of these discussions, he would hope to be in a position to consult on any agreed final undertakings within the next two weeks.

Sky also notes the Secretary of State’s final decision not to intervene on public interest grounds in relation to the Comcast offer for Sky.

The Independent Directors of Sky are mindful of their fiduciary duties and remain focused on maximizing value for Sky shareholders.

A further announcement will be made as and when appropriate.

Comcast did not immediately respond to TheWrap‘s request for comment on this story.