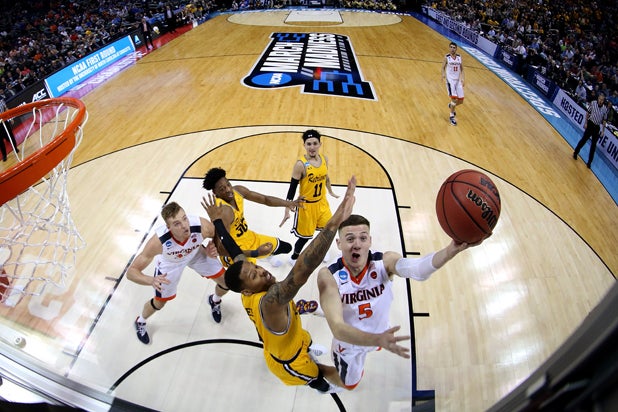 A college basketball team, a drag queen and FC Barcelona’s star forward had viewers talking passionately on social media over the past seven days.

The Wrap has partnered with Canvs, the emotion measurement company, for a weekly look at some of the characters and personalities that have TV viewers the most worked up on social media. The data below covers March 14-20 and is drawn from the most emotionally reacted-to television programs, including broadcast, cable, streaming and PPV.

During the first round of the men’s NCAA Basketball Tournament, No. 16 seed Maryland-Baltimore County (UMBC) upset No. 1 seed Virginia during a historic game that was broadcast on TNT and generated 153,953 Emotional Reactions (ERs). The teams were tied after the first half, but then UMBC pulled ahead, and with 3:29 left to go, forward Arkel Lamar sunk a three-point shot to put his team up by 17… and Virginia never recovered. (UMBC has since been eliminated from the tournament, losing to Kansas State in round two.)

This is truly stunning. Until that last "3" by Lamar, you kept thinking that #Virginia would rally to win. But, do they have time, now? No! #UMBC

Although it was Trixie Mattel who was crowned the winner of VH1’s “RuPaul’s Drag Race All Stars” (41,192 ERs), fellow queen Shangela actually drove slightly more emotional discussion. Fans gushed over her looks and performance, and then expressed outrage with the final verdict, with many commenting that Shangela was utterly robbed.

SHANGELA IS KILLING IT

Lionel Messi was one of the main drivers of conversation during the UEFA Champions League soccer match between FC Barcelona vs. Chelsea FC, which was broadcast on Fox Sports and generated 29,528 ERs. The beloved Barcelona forward scored two of the team’s three goals, one of which happened at the very beginning of the game. Fans rejoiced accordingly.

This Messi guy is pretty good 🙂

Magical Messi has done it again.

Messi is good at Soccerball