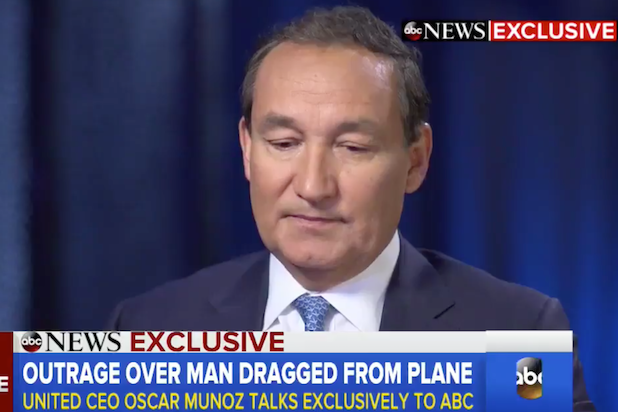 United Airlines CEO Oscar Munoz said he felt “shame” when he saw the viral video of airport police dragging a bloodied passenger from one of his company’s flights.

Munoz continued: “We are not going to put a law enforcement official onto a plane to take them off … to remove a booked, paid, seated passenger; we can’t do that.”

United passenger  David Dao, 69, was forcibly removed from Flight 3411 at Chicago’s O’Hare International Airport on Sunday. Video of his bloody face and the violent treatment he received has since gone viral, sparking an outcry across the country.

After previously describing Dao as “belligerent” and “disruptive,” Munoz issued a new statement on Tuesday that “nobody should be treated this way.”

He explained the second statement on “GMA.”

“I think my reaction to most issues is to get the facts and circumstances,” he said. “My initial words fell short of truly expressing the shame.”

Munoz described the situation with Dao as a “system failure.”

“We have not provided our frontline supervisors and managers and individuals with the proper procedures that would allow them to use their common sense,” he said. “They all have an incredible amount of common sense and this issue could have been solved by that.”

He continued: “This is on me; I have to fix that, and I think that’s something we can do.”