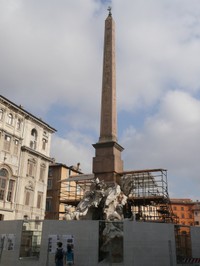 Here’s a very good example of the difficulties posed when you start trying to reset the historical clock, and right old wrongs. This is the famed Piazza Navona in Italy, home of Bernini’s sculpted masterpieces. The  central monument, the Four Rivers Fountain, represents no fewer than three different epochs: Egyptian, Roman and Pontifical. A description of the monument explains its history and current renovation. But the legend tells us only that the obelisk, of Aswan granite, was found in five pieces in the Circus Maximus. A Latin inscription on the base attests that it was made for Domitius in imperial times (from where? how? a mystery.) It was brought to this spot in the mid-17th century so Pope Innocent X could build himself the most glorious monument in all of Rome on this piazza. And this Bernini did. Can this piece be deconstructed at this late stage? If Egypt were to reclaim the obelisk, what would become of the Bernini marble colossi, representing the four rivers of the world? I note this only because Rome has a surfeit of obelisks, and Egypt almost none, although it is also worth noting that Zahi Hawass seems to be giving Italy an utter pass on plundered antiquities. In any event, there are 13 obelisks in Rome alone, and far more today in Italy than in Egypt. (Here’s chapter and verse on Rome’s obelisks. Egypt now has seven.)  I’m getting a little obsessive: I did a tour of Rome’s obelisks (on scooter, a most pleasant task) and found five without much trouble, not including in Vatican square, which I missed. They are of different sizes, and were brought to Rome at different times. There used to be, until recently, an Ethiopian obelisk, taken by the Italian army during its occupation of that country in 1937. It was returned to Ethiopia in 2005. Well, at least that’s a start.