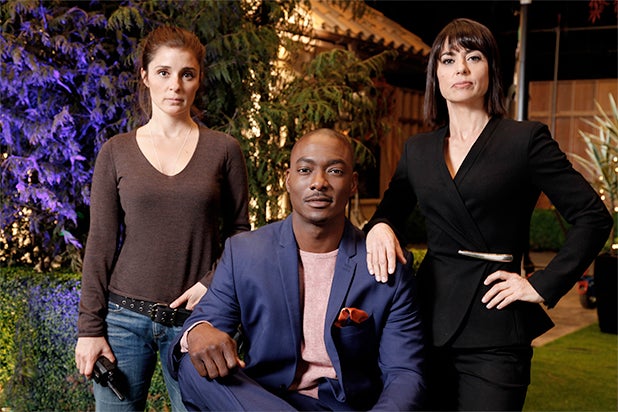 “UnReal” takes a dark look at a “Bachelor”-like dating reality show. So dark, in fact,  that even though a “contestant” on the show-within-a-show died in the middle of the first season, the producers kept rolling on to the end.

So how much darker can “UnReal” get in Season 2?

“The point is not to keep getting darker but to keep it true to the story,” showrunner Marti Noxon told TheWrap. “Whether someone dies or doesn’t die is kind of beside the point… The point is there’s a cost to the things that these people do. If it’s a life or if it’s somebody’s soul, there’s always going to be a cost. “

Below, Noxon and fellow showrunner Sarah Gertrude Shapiro discuss making the decision for Mary (Ashley Scott) to kill herself, why the show is the “female ‘Breaking Bad'” and whether the romance between producer Rachel (Shiri Appleby) and contestant Adam (Freddie Stroma) is really over.

On a show that killed off one of your contestants halfway through season one — you didn’t even wait for the season finale — how much darker can it get or is the point to keep getting darker?
Marti Noxon: In Season 2 we want to keep telling the story that feels real, as “unreal” as it is. If it’s a life or if it’s somebody’s soul, there’s always going to be a cost. So the cost may be super-high in Season 2, but it might not be exactly the same as it was in Season 1.

Sarah Gertrude Shapiro: I remember when we were breaking that story, we were like, okay so Mary’s unstable and the meds get switched and that’s happening, and then she goes off the roof, and that was just the right thing for that story.

Did you debate not having her go through with it?
Noxon: Absolutely. We debated whether it was too much, whether it was jumping the shark, but, at least for us, it felt like that was reflecting things that were happening in the culture. Maybe not during the real time of the show, but we were living through people — after reality shows — ending their lives. We thought, this is what we want to say, which is these are real people. Lives that people are manipulating, it’s effected, there’s an aftermath to what the characters do.

Shapiro: The whole show is about what is real. There was always going to have to be a moment in the season where s— got real real. For us, there was nothing more real than death. It’s done, it’s over, you did the worst thing you could ever do. That was such an important moment for our characters because of exactly what Marti said, there’s a cost sometimes.

This show has been compared to the female version of “Breaking Bad.” Why that analogy?
Shapiro: The only thing we talked about “Breaking Bad” was the tone and what we love about that show and how we created those characters. And the really important thing where you can have compassion for someone who becomes sort of evil, because you understand how they became that way. So that was important for me but that was really the only relationship it had with our show. I think the other reason we say the female “Breaking Bad” is that there just aren’t other female models to compare it to.

What do you think about the label of Rachel as the first true female anti-hero?
Shapiro: It’s just not what we set out to do but it’s sort of what she is. One thing that we did do intentionally is throw out the word likeability. We don’t care if you like her, but it is important that you relate to her. You can understand why she does what she’s doing.

On your TCA panel, you mentioned you were going to be tackling the “men’s rights” movement this season…
Noxon: We’re going to tackle what is our perception to be a man, of masculinity.

Shapiro: Men’s rights — that’s a really horrible word, if you Google that, it’s a horrible, horrible place, so obviously we’re not advocating for some of the stuff that’s come out of that movement. But what we did think was important was to see how feminism affects men, and how feminism affects women. What happens when women decide to act like men and what happens when men decide to reclaim their manhood? So it’s sort of the full spectrum of feminism, men’s rights, women’s rights, how does it all go together? Where do we all end up?

You’ve talked about Season 1 shattering the princess fantasy but even so, there were a lot of fans going, “Aww, Adam and Rachel should end up together.” Were you expecting that reaction?
Noxon: We were, actually, yes. Because the idea that there’s a happy ending, that there’s an actual conventional prince is absolutely in line with what we’ve been taught.

So to pull the rug out from under that is what we live for. We want to say that we all want that, but the fact is, that always lies. Happily ever after is something else. It’s more real, it’s more messy. So yeah, I think it was very gratifying for us seeing people be like, “Noooooo!”

Shapiro: “Noooooo! Rachel and Adam forever!” But we felt it too. I mean, what a great guy. Freddie’s an incredible actor and we love the character of Adam. And the thing is, I don’t think either of us are saying we don’t believe in love. Like Marti’s saying, we just believe that love is hard work and friendship and a lot of commitment. It’s all the stuff that’s messy and not super-sexy that kinda makes a real relationship.

What we’re trying to say is it’s not as easy as going on a show and a guy shows up in a diamond helicopter you’re done. It’s like a life of doing dishes changing kitty litter and driving each other to the doctor and those are the real things.

So it’s not like we want to say Rachel will never find love — we definitely want Rachel to find love. But it’s not going to be Prince Charming taking her to St. Tropez on a jet.

So will we see Adam again? Is that story over?
Noxon: Never. Is your story with your prince ever over?