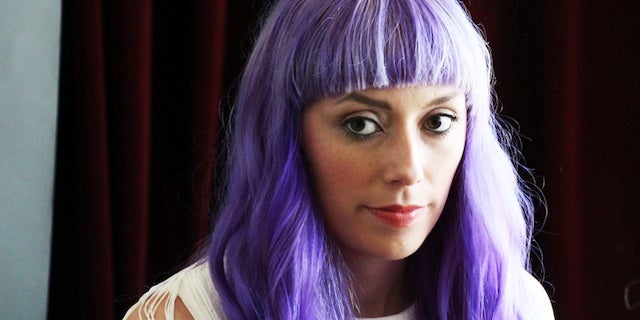 "Veronica Mars" creator Rob Thomas has been doing a really great job bringing the cult series' original players back for the movie. But, a scheduling conflict is keeping Leighton Meester from reprising the role of Carrie Bishop.

Thomas announced on Sunday that indie pop band Twin Sister singer Andrea Estella has been cast in the part of "the gossip queen of the 09ers" who falsely accused Neptune High teacher Mr. Rooks (Adam Scott) of having an affair with her to protect her best friend on Season 1 of the series.

"Sadly, Leighton was doing a different movie during the same time frame on the wrong coast. In the end, she was unavailable," Thomas said.

"One of the reasons I wanted Leighton, beyond her talent/beauty/history in the show, was that we needed a performer who could sing in this important role. Once it became evident that we couldn't make Leighton's schedule work, I decided to cast someone from a band I already wanted in the movie."

Other than singing, Thomas didn't elaborate on Bishop's storyline in the movie. He did say that there will be Twin Sister songs on the soundtrack.

"This is the first movie I've ever appeared in," Estella said in a statement. "I had never seen 'Veronica Mars' before all of this. I've been increasingly interested in finding new TV shows to plow through. I watched the 'Veronica Mars' Pilot and was totally into it! It's the exact kind of show I would get obsessed with, so it's been a bit of dream to be in a movie, especially being a messed up rock princess. How could I say no? I think the VM fans are going to be very happy!"

Estella's addition follows an announcement earlier this week that Gaby Hoffman ("Field of Dreams," "Sleepless in Seattle," "Uncle Buck") had been cast in the entirely new role of Ruby Jetson — again no specifics on the role were released.

"Veronica Mars" set multiple records for Kickstarter when the campaign launched in March, becoming the fastest project to reach $1 million, doing so in a little more than four hours. It reached its $2 million goal the same day and has had more than $5.7 million pledged in total.