Today was not a good day to own Viacom stock — though it probably felt fine for any former shareholders who got out about 19 months ago.

Within the first five minutes of trading on Tuesday, company stock had dropped 10 percent from Monday’s close. It fell off another mini-cliff by 10:20 a.m. ET.

From there, VIAB’s slide became more gradual, but it continued in the wrong direction, eventually dropping a whopping 21 percent by close. Class B stock finished the bank day at $32.86 per share. That was down $8.99 per share. 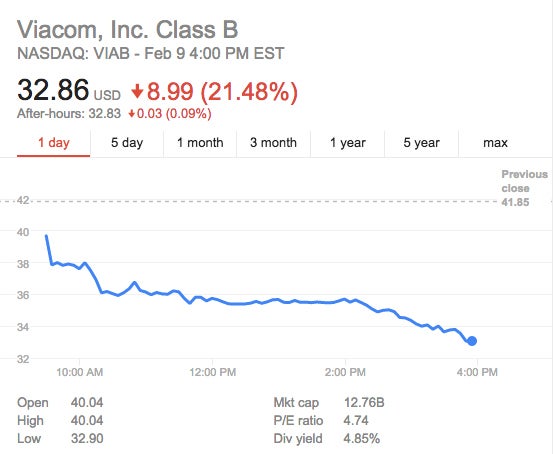 The company president and CEO addressed who he called “the naysayers, self-interested critics and publicity seekers,” saying: “No one should doubt my resolve.”

Dauman was touting his drive to push Viacom stock back up to the good old days. In addition to at least one activist investor calling for the top executive’s ousting, Dauman has been sparring with board member Shari Redstone over his succession into her father Sumner’s old chairman role.