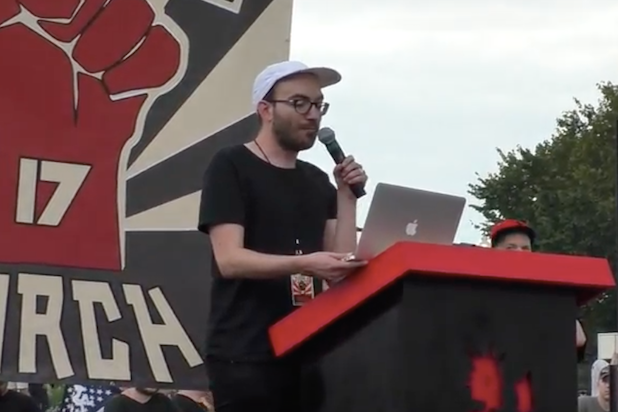 The 6,000-plus-word piece is Sunderland’s first published work since being terminated from Vice back in October 2017 over emails in which, among other things, he asked Yiannopoulos to “mock” “fat feminist” Lindy West.

Penthouse executive editor Mish Barber-Way defended the decision to hire Sunderland for the assignment, noting that she had worked with Sunderland for six years, including as a freelance columnist at Broadly.

“Yes, I am aware of what happened with Mitchell and Vice. I don’t see why I would let two emails ruin Mitchell’s entire body of work,” Barber-Way told TheWrap.

The piece itself contains a number of new details about Daniels, including her acrimonious relationship with her mother Sheila, how she almost went to veterinary school, and some seamier recollections about her encounters with Donald Trump.

“Does his hair stay still as he has sex?” I ask.
“No, [his hair is] real,” Stormy replies. “He chose that.”
“And it just fluffs around as he’s on top of you?”
“Yeah, that’s real. Kind of like a drunken cockatoo.”
“Was it good sex?”
“What do you think?”
“Everyone’s different.”
Stormy sips her wine and side-eyes me.
“And the penis wasn’t big?” I continue.
“Yeah,” Stormy confirms.
“Like his fingers?” I joke.

Also Read: Seth Meyers: 'Trump and His Inner Circle Are Serial Habitual Liars. They Lie Constantly and They Do It on Purpose' (Video)

“Stormy was February 2007’s Penthouse Pet of the Month and one of the first clubs she danced at in her early days was the Penthouse Club in Baton Rouge,” Barber-Way said in explaining the genesis of the story. “The connection was there.”

Once a popular reporter for Vice, Sunderland saw his career implode after leaked emails between him and Yiannopoulos were revealed in a lengthy BuzzFeed exposé by Joseph Bernstein — including one targeting West, a regular contributor to the New York Times and  author of “Shrill: Notes from a Loud Woman.”

The piece for Penthouse is a redemption of sorts for Sunderland. After his termination, the journalist faced widespread ridicule on Twitter and on many left-leaning digital publications. After news of the Penthouse story leaked to the Daily Beast last month, however, many of those same websites lauded the premise (without realizing its author).

Jezebel said the piece would be “inspirational,” while Vice’s own style publication I-D called breathlessly hailed it as “one of the most hotly anticipated pieces of political journalism of the year.”