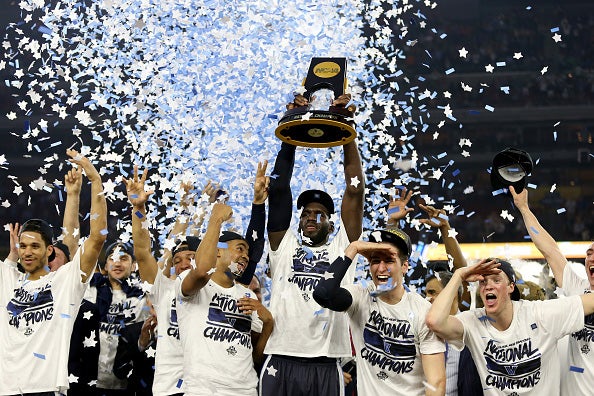 NBA icon and former Tar Heels basketball player Michael Jordan was in the crowd on Monday night for a thrilling NCAA National Championship showdown between North Carolina and Villanova.

Kris Jenkins hit a three-point shot to give Villanova their first championship in 31 years — and the NCAA its first buzzer-beater win since Lorenzo Charles and N.C. State in 1983. It was also number-one seed UNC’s first loss in a title game since 1981, having previously won four straight.

After battling neck-and-neck most of night, the Villanova-UNC matchup was already being touted as the best NCAA Championship game in history before the fans — some celebrating and others devastated — had left the stadium.

“I was just shocked,” Villanova coach Jay Wright marveled. “They did it.”

Before Jenkins did his magic, North Carolina’s Marcus Paige hit a miraculous game-tying shot with 4.7 seconds remaining on the clock that would have been the play of the night … if not for what happened next.

But back to Twitter, which obviously went as wild at the sell-out crowd when the championship-winning shot swooshed through the hoop.

“Crying Jordan” dominated the Twitterverse — with former NFL quarterback Matt Hasselbeck even tweeting about it — the tearful Villanova piccolo player from last year also made an appearance, along with countless expressions of sheer jubilance, utter heartbreak or just plain shock at the brillia

Olympic athlete Lolo Jones pointed out that this was “the only time the crying Michael Jordan face meme has been appropriate in the last year.”

Although technically he was right, we’re pretty sure Rivera meant the North Carolina Tar Heels — rather than the NFL team led by Cam Newton who recently lost the Super Bowl.

As for the real Jordan, the former Chicago Bulls legend can been seen nodding his approval in a sign of respect when Jenkins

Poor Michael Jordan. He was so close to meme redemption. Nope #NationalChampionship

Y'all can't be serious pic.twitter.com/bjUjhmgA57

This is the 1st buzzer-beater to win the national title since Lorenzo Charles and NC State in 1983. pic.twitter.com/P1UL2uVhvm

WHY AREN'T YOU CRYING #NationalChampionship pic.twitter.com/21anXMn4qU

This is how we see things before they happen in sport psychology. Look closely. #Nova #NationalChampionship pic.twitter.com/QOgdePqtgH