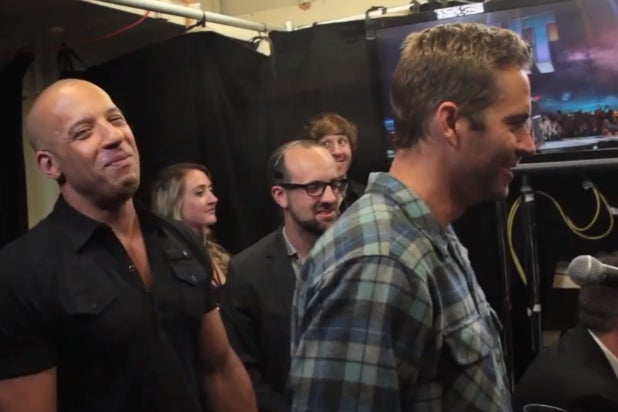 Vin Diesel promised his Facebook fans something special and he delivered on Tuesday night. The actor posting an 18-and-a-half-minute behind-the-scenes look at his friendship with “Fast & Furious” co-star Paul Walker.

Along with the video, Diesel wrote: “A glimpse… of Dom and Brian… off screen.”

In the clip, the two “brothers” goofed around promoting the film, hanging out on-set and off, even interviewing each other at one point for Moviefone’s “Unscripted.” They talked cars, booze, women, running from the cops and the future of the franchise — which Diesel believed was going to make it to movies number 9 or 10.

At one particularly touching moment towards the end, Diesel leads a birthday cake-surprise serenade outside his beloved co-star’s trailer.

Walker died in November, as a passenger in a single car accident in Valencia, Calif. The driver, Walker’s friend and business partner Roger Rodash, was driving a Porshe at speeds in excess of 100 mph, when they hit a curb and struck a tree, then a light post, on the driver’s side. The collision caused the car to spin again, striking a tree on the passenger’s side before bursting into flames, according to an eyewitness account.

Walker, 40, had been in Valencia for a fundraiser benefiting his charity Reach Out Worldwide. Rodas was 38.