WWE chairman Vince McMahon sold 3.34 million shares of company stock on Thursday in an apparent fundraising effort to revive the XFL. Or as the publicly traded company’s Securities and Exchange Commission (SEC) filing states, “to explore investment opportunities across the sports and entertainment landscapes, including professional football.”

As a result of the sell-off, Alpha Entertainment LLC suddenly finds itself flush with cash. And that company has been busy filing XFL patents this month — attorneys there even did some back in 2016.

Remember the XFL? That was the WWE-fied NFL alternative that folded after just one season and lost tons of money for both Vince’s WWE and partner NBC. So… let’s do that again?

McMahon’s 3+ million sold shares represent about 4.3 percent of WWE’s outstanding Class A and Class B shares. Considering WWE shares closed around $32 apiece on Thursday, that means McMahon unloaded more than $100 million in stock.

After news of McMahon’s sale reached Wall Street, others began unloading, too. WWE shares were actually trading down more than 9 percent at one point this morning.

Here’s how that looks: 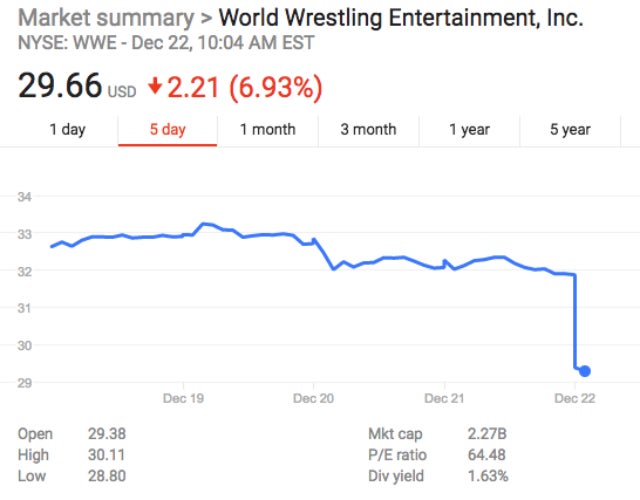 Also Read: WWE's Big E Tells Us if The New Day Could Ever Actually Turn Heel

And here is the full legalese from Thursday’s SEC filing:

On December 21, 2017, Vincent K. McMahon (“Mr. McMahon”), Chairman and Chief Executive Officer of World Wrestling Entertainment, Inc. (the “Company”), sold 3,340,000 shares of the Company’s Class A common stock in a block trade made in accordance with the provisions of Rule 144 of the Securities Act of 1933, as amended. Mr. McMahon executed the sale primarily to fund a separate entity from the Company, Alpha Entertainment LLC, which Mr. McMahon established to explore investment opportunities across the sports and entertainment landscapes, including professional football. Mr. McMahon has informed the Company that he has no current plan to sell additional shares of the Company’s stock and that he intends to continue in his capacity as the Company’s Chairman and Chief Executive Officer for the foreseeable future.