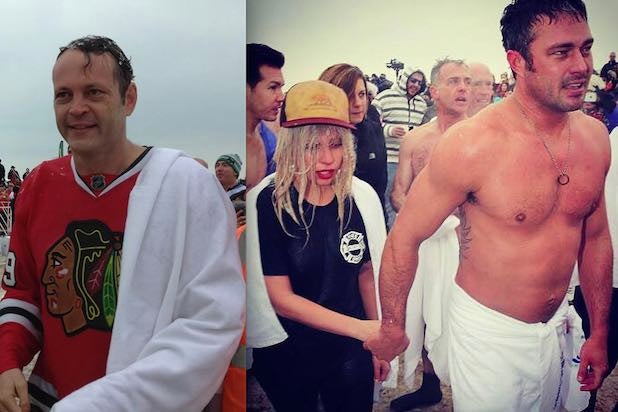 Vince Vaughn joined Lady Gaga, “Chicago Fire” star Taylor Kinney and over 4,500 other people in the icy waters of Lake Michigan on Sunday to raise $1.1 million for the Special Olympics.

The sum is the most the Chicago Polar Plunge has ever raised.

Vaughn, who returns to theaters this week in “Unfinished Business,” was among the first wave of participants who took a dip at the city’s North Avenue Beach. The “Wedding Crashers” star wore a pair of jeans and a Chicago Blackhawks jersey while wading into the freezing-cold water and ultimately submerging himself.

Gaga, who took the dip with fiancé Kinney, shared photos from the event on Facebook and called it “a gesture of love.”

“Feels so good to do things for a good cause like the Special Olympics,” the pop star wrote. “It’s great to donate money, but also great to donate a gesture of love for those who deserve to be showered with it.”

Watch a video from the charity event to see Gaga get wet: