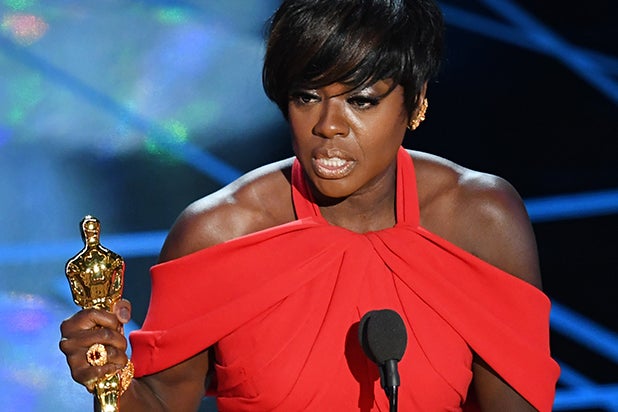 The Wrap has partnered with Canvs, a language analytics company that measures emotions around content, for a weekly look at some of the characters and personalities that have TV viewers the most worked up on social media. The data below covers Feb. 22-28 and is drawn from the most emotionally reacted-to television shows, including broadcast, cable, streaming and PPV.

An Oscar-winning actress, a dead law student and a coach from “The Voice” had viewers talking passionately on social media over the past week.

Of the 1,545,619 Emotional Reactions (ERs) surrounding the Oscars on ABC, 2.4 percent mentioned actress Viola Davis (she garnered more mentions than any other honoree), who won Best Supporting Actress for her role in “Fences.” Viewers were moved by her passionate speech, with many expressing outright love while others commented on her beauty.

I will always love Viola Davis

(The award show’s instantly notorious screw-up regarding the best picture announcement also generated a lot of buzz, of course, but reactions generally were directed at the Oscars and the snafu itself — e.g., #BestPictureScrewup — more than at any of the individuals involved.)

Of the 55,885 ERs surrounding the season 3 finale of “How to Get Away With Murder” on ABC, 12.1 percent mentioned the character Wes (portrayed by Alfred Enoch), even though he’s been dead since the mid-season finale last fall. The second half of this season has focused on the mystery surrounding his demise, with the final (shocking) details revealed last Thursday. Fans expressed dismay as the ultimate turn of events around his death unfolded — the tear-faced emojis were out in full force.

Of the 23,350 ERs surrounding the premiere of NBC’s “The Voice” on February 27, 6.1 percent mentioned coach Gwen Stefani, who returned to the show after two seasons off. People were pleased to see the singer in a big chair once again, with some commenting on her beauty while others were tickled by the relationship between her and fellow coach slash boyfriend Blake Shelton. On the flip side, other viewers found the on-screen PDA a bit nauseating.

Who is Gwen Stefani's makeup artist. I'm so fascinated by Gwen. I wish she had an app.

AWWWWWWW BLAKE THAT WAS SWEEET. Gwen is the comeback Queen!!!!! He adores her & is so proud of her ❤️❤️❤️❤️❤️❤️

Its the first episode of blinds and im ALREADY sick of Gwen and her stupid relationship with Blake ????????????