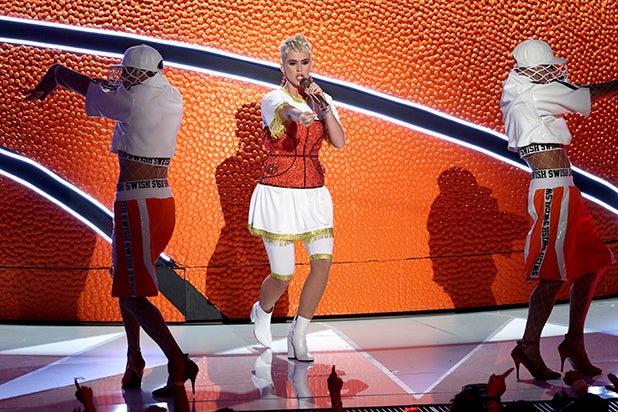 The 2017 MTV Video Music Awards were held at the Forum in Inglewood, California on Saturday night, honoring the most popular songs and music videos of the last year.

The Katy Perry-hosted show was full of musical moments that made the broadcast, including a number of daring stunts and moving performances. But for those who weren’t in the room, TheWrap is here to recap what you missed.

From some surprising commercial break song choices to baffled crowd reactions to some of the night’s performers, here are seven things from the night you didn’t see on TV.

Following Kendrick Lamar’s fiery opener, Ed Sheeran took to the stage to perform “Shape of You,” the inescapable single that dominated the charts for the first half of the year. The crowd seemed to enjoy it, but some of the older audience members were visibly confused when he was joined on stage by Lil Uzi Vert. By the time the Soundcloud rapper transitioned into his “Song of the Summer”-winning single “XO Tour Llif3,” nearly everyone in the room born before 1985 stopped trying to figure out what was happening.

19-year-old Shawn Mendes has plenty of fans, but thanks to an unfortunately timed performance, the show’s producers struggled to find them in the venue. Mendes’ performance of “There’s Nothing Holding Me Back” involved him running into the audience, but minutes before he was set to take the stage, at least half the seats in the section were empty thanks to the re-opening of the bar and concession stands during the first commercial break. Dozens of audience members were relocated from other sections to ensure the on-camera seats were all filled.

Seconds after the show cut to a commercial break following Alessia Cara’s acceptance of her award for Best Electronic Dance Video, the in-house DJ put on the uncensored version of YG’s “FDT,” shocking the crowd with an explicit condemnation of the President of the United States.

Cardi B Is a Phenomenon

It’s been hard to go a day this summer without hearing Cardi B’s “Bodak Yellow,” and the New York rapper’s triumphant season carried over to the Southern California venue on Sunday night. Hundreds of people chanted along to the song’s opening lines when they came through over the speakers during a break, energizing the crowd as much as some of the show’s broadcast moments.

Audience members were given light-up wristbands to wave in the air during some of the night’s performances, but everyone was reminded several times throughout the night that they’d need to be returned. Staff members were even stationed at the exits asking for them back should anyone have mistakenly tried to remove one from the venue.

Before cameras rolled, the show’s hypeman ran the crowd through a number of hand motions to use during the night’s performances — clapping, waving, fist pumping, etc. But when Lorde took to the stage for a jittery dance performance of her “Melodrama” cut “Homemade Dynamite,” no one was quite sure which one to use. By the time she was being thrown around the stage by back-up dancers, the crowd seemed to settle on gentle nodding.

The Forum Clears Out Early

Perry saved her performance of her Taylor Swift-dissing single “Swish Swish” for last. But by the time she and guest Nicki Minaj took the stage, a good chunk of the audience seemed to have already cleared out, trying to beat traffic.

Honestly, Probably Most of It

Two-thirds of the 2017 VMAs were competing against the penultimate season finale of HBO’s “Game of Thrones,” one of the most highly anticipated TV events of the year. Perry even made a joke toward the end of the broadcast acknowledging all the people who likely tuned in after “Thrones” was over.