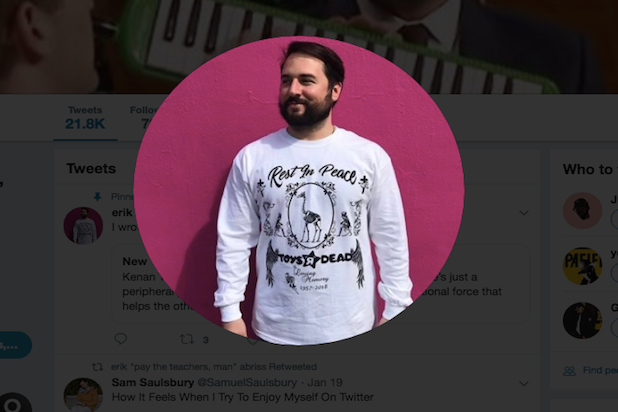 Digital company INE Entertainment has fired a journalist who publicly wished for the death of several Covington Catholic High School students and their parents in a pair of tweets over the weekend. Aside from his job as a post-production supervisor at INE, Erik Abriss is a contributor to New York Media’s pop culture site Vulture.

“We were surprised and upset to see the inflammatory and offensive rhetoric used on Erik Abriss’ Twitter account this weekend. He worked with the company in our post-production department and never as a writer,” the company said in a statement to TheWrap on Monday.

“While we appreciated his work, it is clear that he is no longer aligned with our company’s core values of respect and tolerance. Therefore, as of January 21, 2019, we have severed ties with Abriss.”

Passions ran high on social media Saturday after video emerged of several students from Covington, many of whom were wearing “Make America Great Again” hats, surrounding a Native American elder who was in Washington, D.C. for the Indigenous Peoples’ March. Many viewers believed the teens were attempting to taunt the elder, Nathan Phillips.

In his tweet on Saturday, Abriss wrote: “I don’t know what it says about me but I’ve truly lost the ability to articulate the hysterical rage, nausea, and heartache this makes me feel. I just want these people to die. Simple as that. Every single one of them. And their parents.”

He added: “‘Racism is in its Boomer death throes. It will die out with this younger generation!’ Look at the shit-eating grins on all those young white slugs’ faces. Just perverse pleasure at wielding a false dominion they’ve been taught their whole life was their divine right. F–ing die.”

The tweets remained live as of Monday morning. (An archived version can be viewed here.) Abriss did not immediately respond to a request for comment from TheWrap.

Strong emotions about the confrontation abounded. The National Review ran an article saying the behavior of the teens was like spitting on the cross, but retracted it when more detail about the situation emerged.