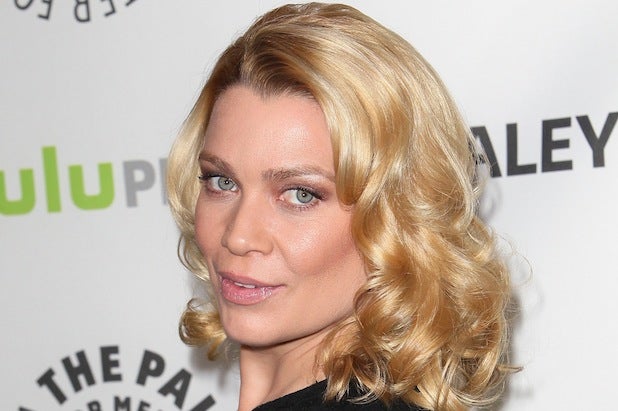 Laurie Holden, who played Andrea on AMC’s hit series “The Walking Dead,” is set to join Jim Carrey and Jeff Daniels in “Dumb and Dumber To,” an individual familiar with the project has told TheWrap.

Peter and Bobby Farrelly are directing the follow-up to 1994’s “Dumb and Dumber,” which grossed $247 million worldwide.

Sequel finds Harry (Daniels) in need of a kidney transplant, forcing him and Lloyd to hit the road to find his possible illegitimate daughter (Rachel Melvin) who may be a donor.

Holden will play the girl’s stepmom, who married a wealthy doctor (Steve Tom) to inherit his fortune.

Kathleen Turner co-stars as the girl’s biological mother who was conceived after a sexual encounter with one of the two male leads.

Red Granite is producing and financing the movie, which will be distributed in the U.S. by Universal Pictures.

The Farrelly brothers wrote the script with Bennett Yellin and Mike Cerrone, with an earlier draft written by Sean Anders and John Morris. The Farrells are producing with Red Granite’s Riza Aziz and Joey McFarland, as well as Bradley Thomas and Charlie Wessler.

Jon Mone will oversee the project for Universal, while David Koplan will oversee on behalf of Red Granite Pictures.

Production starts this month with a tentative release date summer 2014, which marks the 20thanniversary of the first “Dumb and Dumber.”

Holden has worked with Carrey before on Frank Darabont’s “The Majestic.” She’s repped by APA and attorney Alan Wertheimer.

Melvin, who starred on “Days of Our Lives,” is repped by Innovative Artists and ROAR.

Tom, who recently appeared in WB’s “The Campaign” and Paramount’s “The Guilt Trip,” is repped by O’Neill Talent Group and Silverberg Management Group.