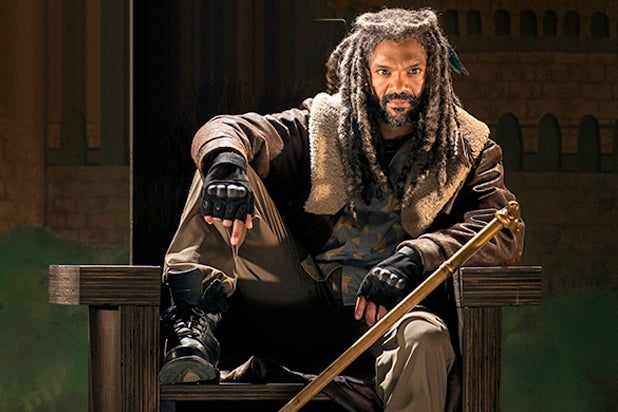 (Spoiler alert: Do not keep reading if you are not caught up on “The Walking Dead”)

“The Walking Dead” may have just introduced King Ezekiel (Khary Payton), but the actor playing the flamboyant leader already has a theory on the relationship between The Kingdom and The Saviors.

“I may be talking out of turn here because I haven’t discussed this with Scott at all and he may come back to me say, ‘Khary, that was total B.S. I don’t know how you came up with it,’ but since he hasn’t given an explanation, I’m going to tell you what I think,” Payton told Entertainment Weekly.

“My idea is that the Kingdom was the one place that Negan hasn’t come to on his own and hasn’t Lucille-d anyone from,” he said.

“I think the Saviors came upon him and he brought out the tiger and he made a deal: ‘If you don’t touch anybody, we’re going to be all right,'” he continued. “I think the whole king thing and the tiger and everything might’ve thrown them off just enough to be like, ‘You’re gonna do as we say just as long as we walk away and don’t go any further.'”

And we have already seen what happens when people don’t do as Negan say. In the brutal Season 7 premiere, the series’ new villain barbarically killed two main characters by bashing their heads in with a barbed wire baseball bat.