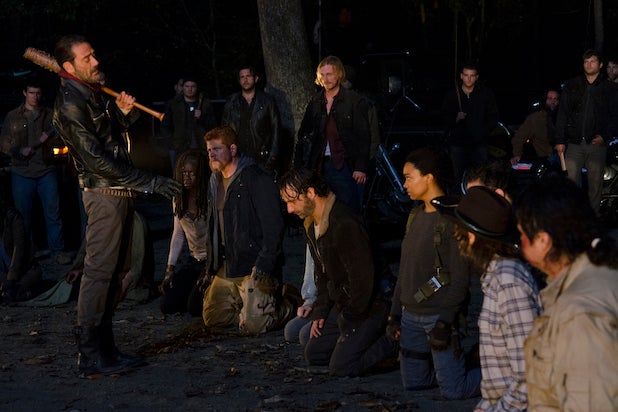 “The Walking Dead” finally introduced Negan (Jeffrey Dean Morgan) in the Season 6 finale, and in doing so managed to piss off their entire fan base.

Negan used his trusty barbed wire baseball bat, Lucille, to beat someone to death, but viewers weren’t able to tell who, causing a tidal wave of angry reactions online.

“At least people who haven’t seen the episode yet don’t have to worry about spoilers since there’s actually nothing to spoil,” one fan wrote back in April.

Read some of our favorite angry reactions ahead of the Season 7 premiere on Oct. 23.

Dude, how are they gunna film S7 of TWD when they killed the camera guy? #TWDFinale

There is a time and a place for cliffhangers and THAT WAS NOT IT. #TWDFinale

how are they going to promote next season?! trailers with no characters in them?! #TWDFinale

Seems like the writers failed, because this cliffhanger didn’t leave me curious about S7, it just made me angry. #TWDFinale

got was basically 80mins of filler with 10 mins of tension, ending with a totally unnecessary cliffhanger. Ok I’m done now #TWDFinale #TWD

One of the best scenes of TWD, and they ruined it by adding the cliffhanger #TWDFinale

90 whole mins and no one died? it was just them mostly driving around i hate this the cliffhanger was stupid #TWDFinale