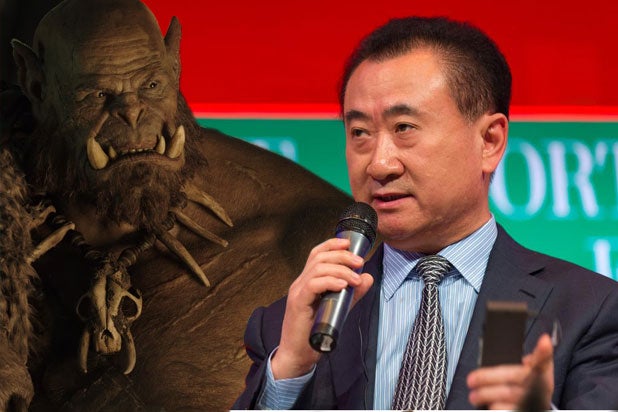 Wang Jianlin’s 28-year-old Wanda Group is on pace to spend more than $30 billion in deals this year, with almost half of that in sports and entertainment.

The company that began as a residential real estate development firm in the northern port city of Dalian, China, has grown at a record pace. This week, it announced plans to install 4,000 new RealD 3D screens and 150 new IMAX theaters — both the largest-ever installation deals for each of those formats.

But even as Wanda’s might and influence have grown — particularly in Hollywood with its acquisition of “Jurassic World” and “Warcraft” production company Legendary Entertainment and talk of a possible stake in Paramount Pictures — some troubling signs have emerged that the company may not be able to maintain its level of growth or performance. Here are five of them:

Wanda entered the movie business somewhat unintentionally — it found that multiplexes were great anchors for the shopping malls it was developing in mainland China, and the country’s burgeoning moviegoing middle class made theaters a lucrative investment.

At the end of June, Wanda Cinema Line operated 320 theaters, almost all of them in China, with 2,789 screens, making it the largest exhibitor in what could be the world’s biggest movie market as soon as 2017.

But as Wanda continues to aggressively add capacity — particularly in second- and third-tier cities — China’s sizzling box office has shown some signs of a cool-down. For the second quarter, the company reported its first year-over-year decline in five years with the decline in movie-ticket subsidies paid for by producers via mobile ticketing apps. (Chinese paid about $5 to see “Batman v Superman: Dawn of Justice” in an IMAX theater.)

When Chinese crowds have to start paying something closer to the true retail price of seeing a movie, demand could slide, especially in places not as rich as the coastal cities.

Theme parks could throw up another hurdle in Wanda’s race to the top. With Shanghai Disneyland Park opening this year and Universal Studios Beijing coming in 2019, Wanda has decided to directly challenge those entertainment giants with a chain of parks of its own.

That’s been a mixed bag so far. When it opened its Nanchang park earlier this year, Disney issued warnings about potential intellectual-property infringement after visitors spotted Wanda employees dressed as trademarked Disney characters at the park’s adjacent mall. And Wanda’s Wuhan park recently closed for an indeterminate period of time for renovations and upgrades.

Wang made his biggest splash in Hollywood yet with Wanda’s January $3.5 billion acquisition of Thomas Tull‘s Legendary Pictures, the production company behind some of the most popular English-language films in China in recent years, including “Jurassic World” and “Warcraft” (though the latter was a box office disappointment in North America, earning just $47 million to date).

The deal seemed to make strategic sense: Legendary makes a lot of big-budget action films — which generate revenue around the world, outside of China, adding another layer of geographic diversification to Wanda’s revenue streams. The company also has original content Wanda can use in its theme parks.

But Legendary has had a mixed track record over the last few years, with losses actually exceeding total revenue in 2015. And Legendary’s upcoming $160 million “The Great Wall,” the first English-language film from director Zhang Yimou, has already seen its first trailer slammed for “whitewashing,” as the decidedly non-Chinese Matt Damon plays the lead role.

“The Great Wall” is intended to be Chinese cinema’s long-awaited crossover hit outside the Middle Kingdom — local execs have expressed exasperation with homegrown Chinese films’ inability to travel — but its rollout has hardly been smooth. The movie has already been pushed back to February 2017 from its initial late 2016 release.

This week, Wanda postponed plans to have its publicly traded Wanda Cinema Line complete a $5.7 billion acquisition of Wanda Media, the subsidiary that owns Legendary. In a filing, Wanda said the consolidation move didn’t make sense until Legendary, which reported a loss of $500 million last year, began to turn a consistent profit. It also cited “major changes” in the market conditions.

The Shenzhen stock exchange’s regulators had recently requested more information about the dozens of related parties who would be participating in the transaction.

Wanda Cinema Line’s shares have been suspended from trading since February, when the planned restructuring was first announced. That move has slowed the company’s buying spree. Wanda tends to pay cash. Still, the company was hoping to use a more robust Wanda Cinema Line to raise money on the bouncy Shenzhen exchange, and that plan is on hold.

Wanda is considered a leading contender to buy a 49 percent stake in Paramount Pictures in a deal that could value the entire studio as high as $10 billion, well above the $4 billion an analyst estimated it to be worth in February. Wanda has also sniffed around other Hollywood studios such as Lionsgate.

But either move could run afoul of U.S. regulators. Since a 1948 Supreme Court ruling against Paramount Pictures, U.S. movie studios have been barred from directly own movie theaters. Competitors have finessed the rule through the use of holding companies and other forms of indirect ownership, such as National Amusement’s ownership of Paramount Pictures parent Viacom.

Wanda owns AMC Theaters, is actively attempting to acquire Carmike, and recently acquired Europe’s largest theater chain. So the the idea of the world’s largest movie theater company owning all or part of a major studio could inspire some antitrust challenges.

Wanda pumped Legendary’s “Warcraft” into 67 percent of China’s screens. However, one entertainment lawyer told TheWrap he could easily see a scenario where the 1948 ban would be overturned altogether.

But while Wanda faces headwinds really for the first time in its history as an entertainment company, China’s appetite for TV, movies and all sorts of entertainment has been obliterating conservative projections for years.

Richard Gelfond, the CEO of IMAX, of which Wanda is the world’s biggest customer, initially pegged China as a market that could support 90 IMAX theaters.