Nobody cried havoc, but somebody let slip “War Dogs” anyway.

This airless, laugh-less true story about 20-something wheeler-dealers who became arms salesmen during the Bush-Cheney invasions of Iraq and Afghanistan has no point of view, nor anything to say about war or commerce or even 20-somethings who wheel and deal. It’s a waste of time for everyone involved, not least its leading men Miles Teller and Jonah Hill, neither of whom exhibit even the tiniest amount of their usual onscreen charisma.

An early scene has Hill’s character firing an automatic weapon into the air to frighten some drug dealers (all of them black, because this is that kind of movie) who have just ripped him off, and the moment feels like a metaphor for how Todd Phillips (the “Hangover” films) directs. He lobs a bunch of ideas and characters skyward, with no particular targets in mind, satirical, dramatic or otherwise.

This alleged comedy becomes such a drag that you find yourself noticing the exceedingly lazy song choices (between “War Dogs” and “Suicide Squad,” it’s clear someone at Warner Bros. is listening to too much oldies FM) and the lackadaisical cinematography (by Lawrence Sher, also of the “Hangover” films) that makes Miami Beach in the summer look as murky as January in Albania.

All that globe-trotting is necessary to tell the tale of David Packouz (Teller) and Efraim Diveroli (Hill), who become unlikely weapons merchants. David works as a masseur in South Beach (cue the film’s cringe-inducing gay panic over his male clientele) with dreams of making it big, although his scheme to sell sheets to local retirement homes has hit a wall. When he reunites with his bad-news, junior-high best pal Efraim in 2005, he discovers there’s big money in winning relatively small contracts with the Pentagon to provide soldiers with their battlefield equipment.

Also Read: Miles Teller Is Down for a 'Fantastic Four' Sequel 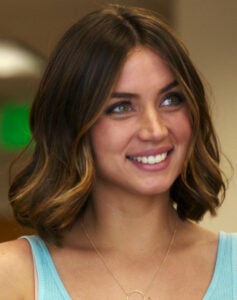 The two start a company called AEY — it literally and figuratively stands for nothing — and even though David and his wife Iz (Ana de Armas, “Knock Knock”) are against the war, he plunges in, particularly after she announces she’s pregnant. Their company gains some renown when they are able to transport Berettas to Baghdad despite an Italian embargo (it involves smuggling them via Jordan and driving through what they only later learn is the “Triangle of Death”), and they think they’ve hit the big time when they get a chance to work with the nefarious Henry Girard (Bradley Cooper, again, the “Hangover” films) on the sale of 100 million rounds of AK-47 ammunition to the Pentagon.

Their big plans don’t quite work out, of course, and one of the main problems with “War Dogs” is that David is bland and Efraim is such a conniving sociopath that it’s hard to give the slightest of damns what happens to either of them. The screenplay (by Phillips, Stephen Chin and Jason Smilovic, based on a Rolling Stone article by Guy Lawson) uses Teller’s constant narration as a crutch for the fact that there’s nothing of interest going on. The movie doesn’t care about David and Efraim’s friendship or about the ethical implications of their business, Iz is just there to nag David about not being honest with her, and there’s nothing said about how the Bush-Cheney wars were waged or about the bureaucracy that allowed David and Efraim, for a while anyway, to become very rich.

It’s telling that the real David Packouz has a cameo here, since the movie is told completely from his point of view. The narration tells us that Efraim puts on an act with everyone, acting like whoever the other person needs him to be — David figures out too late that Efraim does the same thing to him — so not only is the film skewed toward his point of view, but it also portrays him as an affable good guy with no personality. It’s as though the only way to get the real person to sign off on the movie was to strip his character of any, well, character.

As for Efraim, he likes to quote “Scarface” a lot, and it’s never a good idea for a bad movie to refer constantly to a better one. Of course, a movie worse than “War Dogs” for him to quote would have been a tall order.